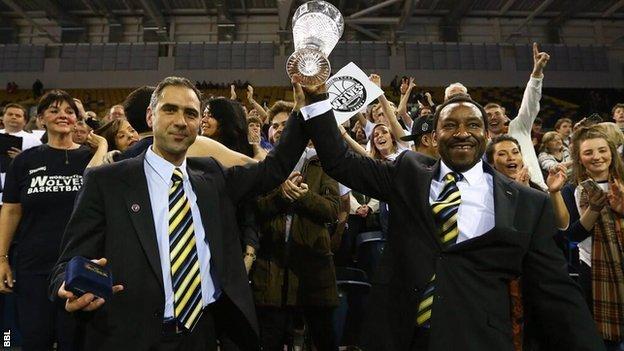 Worcester Wolves won the first BBL honour in their eight-year top-flight history with an 83-76 win over Glasgow Rocks in the BBL Trophy final.

Jamal Williams won the most valuable player award with 26 points and centre Will Creekmore added 22 of his own.

The Wolves trailed for most of the first half but began to take command in the third quarter.

Gareth Murray led the scoring with 23 points for the Rocks, who have now not won a trophy since 2003.

The Wolves trailed by 10 points at the end of the first quarter and only gained the lead in the last minute of the third, when four points in a row from Williams brought them a 56-55 advantage.

Murray then hit two threes in the fourth quarter to put the Rocks back in front, but Williams, Creekmore and Zaire Taylor combined in a 19-9 run that brought the Wolves home.

"We were tentative to start with and let Glasgow play to their strengths.

"But in the second half, we were much more aggressive and we knew we were going to have to win this as a team."

"It was a tough game for us - I thought our guys worked hard and did a good job defensively.

"But when it came down to the closing stages we weren't able to get those stops that we needed to."