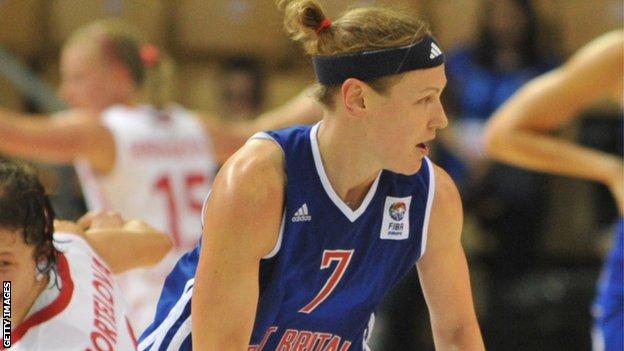 Great Britain's women suffered a late defeat to Germany in the second of their two matches in Worcester.

Britain, who had beaten the Germans 64-42 on Saturday, went down 56-54, with top scorer Katharina Fikiel getting the winning basket for the visitors with only 2.7 seconds left.

Britain now face Russia in Moscow on Wednesday and Thursday.

With Stef Collins making her 113th appearance for her country, Britain led 21-13 at the end of the first quarter and 30-27 at half-time.

Germany tightened up their defence in the second half and led by a point going into the final quarter, but Fagbenle and Rachael Vanderwal helped Britain to a four-point lead with 33 seconds remaining.

A three-point play from Germany's Romy Bar cut the lead to one point before another Vanderwal free throw put Britain two ahead.

But then Nelli Dietrich hit two free throws to level the game before Fikiel's basket gave Germany the victory.