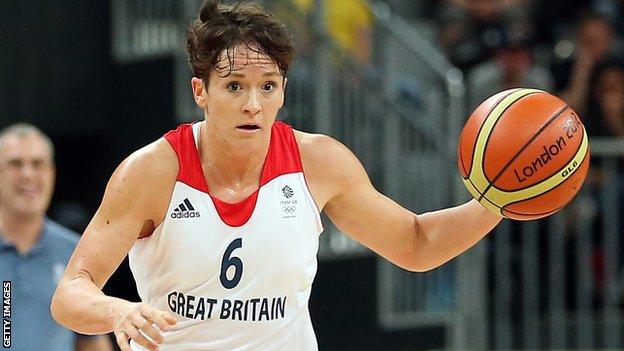 Great Britain captain Stef Collins says her team have a point to prove when they launch their European campaign.

GB take on Belgium on Sunday as they start their bid for a place at next year's EuroBasket tournament.

"We owe it to ourselves to keep going, to keep building the sport in this country," Collins, 31, told BBC Sport."

"And we're still doing exactly what we want to do, regardless of the funding situation.

"We're still getting to train, prepare and play Test matches and we're still going to try to be successful."

Great Britain's women enjoyed the best results in the team's history last year, with three wins at EuroBasket 2013, including a victory over Serbia, who eventually finished fourth.

But now GB Basketball are relying on corporate funding to be able to compete.

On Sunday, the British team play at the University of Worcester Arena against Belgium, who are ranked 43rd in the world, 19 places below Britain.

"They have more of a tradition of basketball in their country, as GB only came together in 2006," said Collins.

"Belgium might have more experience under their belt but with our preparation and our style we can match them."

One of the players whose flair will be invaluable to the British side is Temi Fagbenle.

The 21-year-old, who competed at London 2012, mixes her international duties with studying for a degree in social anthropology at Harvard University, where she has made a big impression on the Ivy League.

Her skipper said: "She's a really natural athlete, she brings so much to the game. Our opponents will have a tough time matching up to her."

To make it to next year's EuroBasket tournament, Collins and her team will need to finish in the top two of their qualifying group.

For now, the British team are putting their financial woes behind them, but with GB Basketball's ability to fund future campaigns in doubt, their path to Rio 2016 looks uncertain.

"Where there's a will there's a way," said Collins. "Right now we're just focusing on this summer, winning the next six games and getting qualified for EuroBasket 2015."