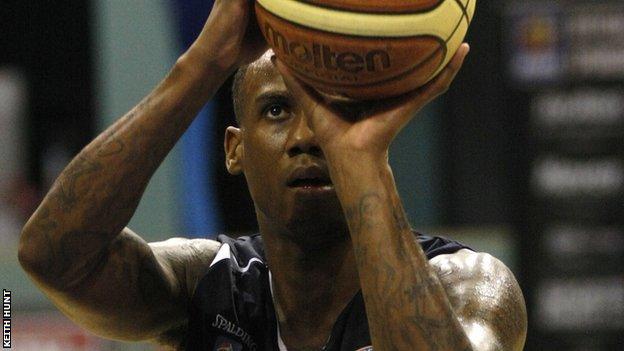 Worcester Wolves captain Alex Owumi has signed on to play for the BBL Trophy and Championship play-off winners for a third season.

Guard Owuim, 29, averaged 18 points per game for Wolves in their double-trophy winning campaign in 2013-14.

"It was an easy decision for me to come back to Worcester, the club and city support everything I'm doing on and off the court," Owumi said.

He set an example to everyone last year with his leadership, and I fully expect him to carry this on.

"Next season should be exciting, I'm looking forward to building on it."

"In the couple of years that Alex has been here, he has been central to our successes," James said.

"In his first season we came close to winning competitions, but couldn't quite make it over the line. That all changed last year.

"He's the first to re-commit himself to our cause this time around and he set an example to everyone last year with his leadership, and I fully expect him to carry this on.

"We will be going all out to maintain our position as one of the league's premier sides, and I am thrilled that we have the first building block in place."

Owumi's new contract comes a day after it was announced the club has been taken over by long-term supporter, the University of Worcester.