Golden State Warriors' golden boy Stephen Curry has done it again - set another record, that is.

He's the first player in NBA history to score a three-point shot in 128 consecutive games, passing a mark set by Atlanta's Kyle Korver.

That comes just a few days after helping the Oakland-based Warriors - the defending NBA champions - become the fastest-ever side to 50 wins in a season. They beat a record set by Michael Jordan's all-conquering Chicago Bulls 20 years ago.

The thing is, Curry, 27 - more popularly known as Steph - just keeps on getting better. But could he take something else from Jordan - his status as the game's greatest ever player?

He's got the skills

Curry was voted last season's Most Valuable Player after becoming the talisman who turned around an unfancied side and made them champions.

That's largely down to his shooting skills. He's the three-point master with 1,457 three-pointers in his seven-year career to date. It means he's on track to smash the record for most made in a career, held by Ray Allen, with 2,973.

Don't take it from us. This is what the President of the United States, Barack Obama, thinks: "Curry's the best shooter I've ever seen. In terms of being able to get his shot off from anywhere, that fast - the best I've ever seen."

Kobe Bryant, who will retire at the end of the season as one of the all-time greats, hates playing against him. When asked earlier this week who was the toughest player to guard against, there was only one answer: "It has to be Steph Curry, has to be."

Are people really comparing him to Jordan?

Well here's Milwaukee Bucks coach Jason Kidd: "He's this generation's Jordan. We all wanted to be like Mike, and children today will grow up seeing Steph."

And this is what Vasu Kulkarni, the self-proclaimed "world's biggest Michael Jordan fan," thinks: "I never really believed that someone could be better than Jordan. I'm not saying it with conviction yet, but through the years… Kobe, LeBron, (Tim) Duncan…. I never once even bothered to entertain the possibility that any of them could be better than Mike. Jordan was, is, and always will be the greatest of all time. I always believed that I would go to my grave, knowing that to be the truth.

"Until today. What Steph Curry is doing is not normal. It's not human."

And how good was Jordan?

You mean The Greatest Of All Time? A brief roll of honour includes: 1985 Rookie of the Year, five-time NBA Most Valuable Player, six-time NBA championship winner, holds the NBA All-Star Game career record for highest scoring average, holds the NBA record for most seasons leading scorer (10).... you get the picture.

What about Kobe and LeBron?

Curry certainly has his fans, but there are still plenty who say the retiring Kobe Bryant or LeBron James are better players. While others still insist Jordan remains incomparable.

Here's Bernie Lincicome, writing in the Chicago Tribune: "Jordan is the standard, the mark, the obsession, I suppose, and will remain so until LeBron James changes minds. The irony is that Jordan is not the best basketball player ever, which is the working definition and consuming ambition of those who would be great.

"James is the current NBA standard and clearly in front of Curry by any measurement that can be applied, save three-point shots, and, really, isn't that a gimmick more than basketball?"

It's not just the points scoring and style of play that are seeing Curry mentioned in the same breath as the game's greats. Off court, he's a role model.

There's the background story too. From being overlooked for NBA draft as a college kid, to the league's Most Valuable Player, Curry's tale is that of the classic underdog.

And he's not the arrogant superstar changed by fame: "He's one of the most humble superstars there is, by far," says Warriors veteran Shaun Livingston. His faith, his beliefs and his value system is unprecedented.

"On the court it's his style of play, for one. He's a showman, but at the same time he doesn't show people up. That's hard to do in this league, because there's a line that you can cross by playing that way. His humility kind of resonates throughout the locker room."

It's why America loves him: more shirts are sold with his name on than any other athlete in more than 40 US states.

The "faith" Livingston spoke of helps his reputation too. Even the Billy Graham Evangelistic Association is lauding his achievements.

America loves his family too

Curry admitted TV executives were desperate to sign up daughter Riley - then aged just two - after she took over a post-game press conference last year.

Then last year along came a second super-cute daughter, Ryan. Together with childhood sweetheart wife Ayesha - they met at church as teenagers - the image of the perfect family unit is being lapped up by fans on social media. Ayesha, 26, has more than 2.5m followers on Instagram.

Jordan had Nike - Curry has the world at his feet.

As well as the skills on the court, it's Curry's marketability that is seeing him morph into a megastar.

One of the brands he supports, sportswear firm Under Armour, wants to build a $1bn empire around him.

How does he compare? 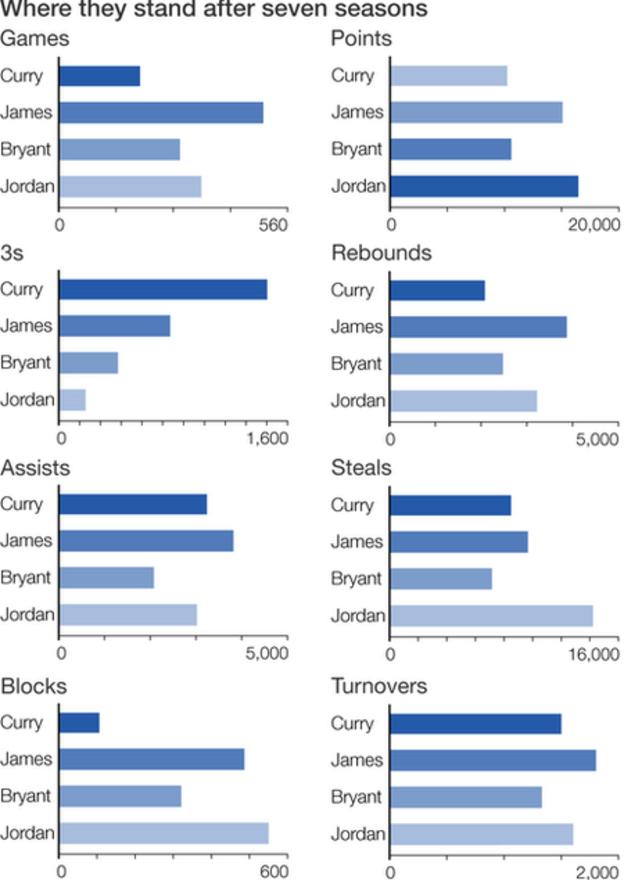 OK, so doing a flat comparison doesn't tell the whole story - Jordan missed 64 games in his second season because he was injured. They might have different roles in their teams too.

And physically he's different to the to the other players who would succeed Jordan - LeBron is a 6ft 8ins, 250lb machine, for example.

But this is how they looked after seven seasons - though Curry is yet to complete his seventh year.

The next Jordan - or the first Curry?

Who says you have to be the next Michael Jordan anyway? What's wrong with being the first Steph Curry? He plays in a different way, for one thing: "Curry is standing at the forefront of a new era of playmaker," says ESPN's David Fleming.

So much so that game developers are struggling to keep their virtual Curry in step with the real thing. Mike Wang, gameplay director of NBA 2K, the biggest basketball game in the US, told Forbes magazine: "To be completely honest, we are still looking for ways to better translate his game into NBA 2K."

The final word goes to Minnesota Timberwolves' veteran Kevin Garnett, who played at the same time as Jordan. He had this to say after his side was taken apart by Curry's magic in November: "Like Michael Jordan was a whole other thing, this guy is his own thing. It's beautiful for basketball."