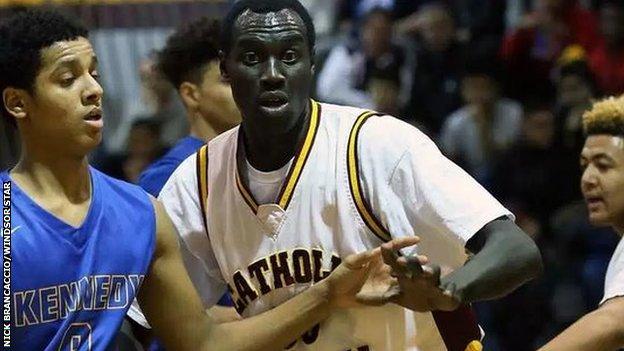 A college basketball player tipped to make the NBA could turn out to be 29 years old, not 17.

Reports in Canada suggest Jonathon Nicola, who is 6ft 9in and wears size 16 shoes, has been arrested for allegedly contravening immigration rules.

From South Sudan, Nicola has been making headlines playing for the Catholic Central High School in Windsor, Ontario, since arriving in Canada six months ago.

He enrolled as a 17-year-old grade 11 student and quickly became the star player on the Catholic Central Comets senior boys' basketball team.

Nicola was reportedly living with Comets head coach Pete Cusumano through a programme which finds homes for foreign students.

In January, Cusumano told the Windsor Star: "I think this kid will have a chance at the NBA."

Nicola said he came to Canada to escape the civil war in his homeland and had to repeatedly travel to Kenya to obtain a Canadian visa.

He is being kept at a detention centre by the Canada Border Services Agency, which told the Guardian: "When he recently applied for a US visitor visa, it was determined by fingerprint match that he was the same individual who had made a previous application to the US using a DOB of November 1, 1986."