With his long, ragged hair and handlebar moustache, Steven Adams looks like he has stepped out of the 1970s.

But this 7ft tall New Zealander with a sleeve of tattoos is fast becoming the star of the NBA play-offs and is even putting the league's most valuable player Stephen Curry in the shade.

Adams and his Oklahoma City Thunder side beat Golden State Warriors 118-94 in game four of the Western Conference finals on Tuesday, to lead last year's champions 3-1 in the best-of-seven series.

It was the first back-to back defeats for the Warriors this season, a team who set a new NBA record of 73 wins in the regular season.

Russell Westbrook and Kevin Durant were the stars of the show for the Thunder, but even they were eclipsed by a moment of magic from Adams.

The 22-year-old, who scored 11 points and seven rebounds in the win, threw a one-handed bullet pass to Andre Roberson just before half-time.

More than 22,000 tweets were sent in an hour about Adams' baseball style throw and the player began trending on Twitter in his native New Zealand and the US. 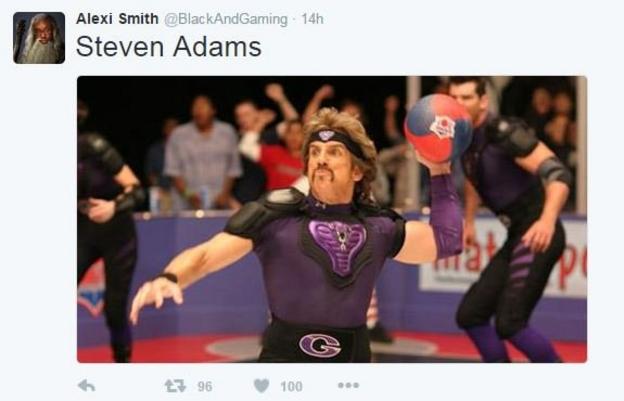 Then there was a young fan who turned up to the game at Oklahoma's Chesapeake Arena, dressed as Adams with a fake moustache and tattoos in tribute to her hero.

Many Twitter users felt the youngster was the real star of game four and even Adams himself tweeted that it was "absolutely amazing".

In game three Adams hit the headlines after Warriors forward Draymond Green kicked him in the groin area, but avoided suspension.

It led to Thunder fans using the hashtag #standupforsteven in the build-up to Tuesday's game. 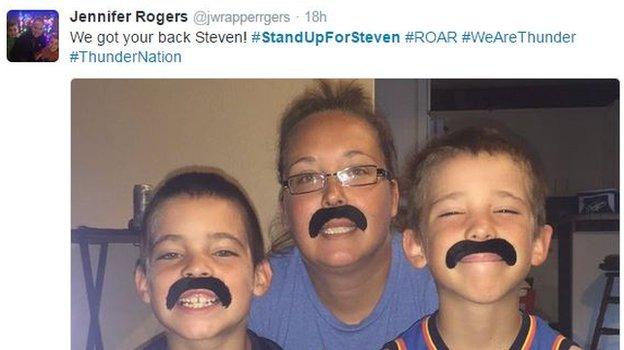 Adams has rarely been out of the headlines in the series. After game one he had to apologise for referring to the Warriors' players as "quick little monkeys".

"It was just a poor choice of words," said Adams, who blamed differences in dialect for his comments.

"I wasn't thinking straight. I didn't know it was going to upset anyone."

Then there is his family - Adams is the youngest of 18 siblings.

Six of his brothers have played basketball for New Zealand, while his half-sister Valerie, 31, is a double Olympic champion shot putter.

And for Games of Thrones fans...