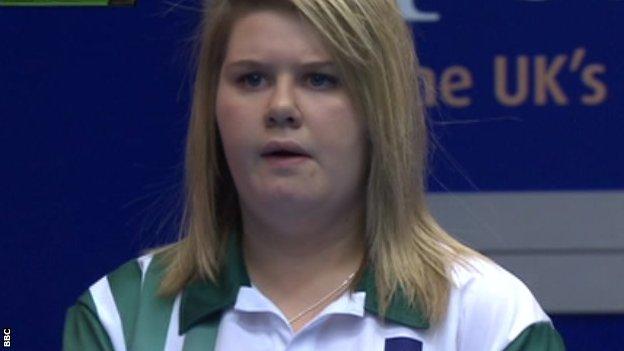 The youngest ever winner of the World Indoor Bowls women's singles title admits she has a homework confession to make to her teachers when she returns to school on Friday.

Katherine Rednall made history when she defeated Norfolk's Rebecca Field in two sets in what was her World Indoor debut at Potters resort in Hopton, Norfolk.

The 18-year-old is in the second year of her A-Levels at Stowmarket High School and would normally have been in a double textiles lesson when she completed her victory.

Rednall, who is also studying history and physics, told BBC Sport: "I brought some work with me in case there was time but luckily I kept winning matches. Hopefully the teachers will understand!

"Fifty of my friends watched the final in the classroom, I'm really looking forward to seeing them all again."

The Suffolk schoolgirl's father is the vastly experienced England lead John Rednall, whose accomplishments include selection for the 1994 Commonwealth Games in Canada.

She added: "I have been playing since I was five or six. My mum and dad both play - as have all four of my grandparents.

"So, I'm never short of options when I need some advice. But if I had to pick one person who has been my mentor it would definitely be dad."

Rednall won the first set 14-4, before cruising to victory over the defending champion with an 11-3 win in the second.

Rednall insisted she will resist the temptation to splash out with her £5,000 winner's cheque, adding: "I'll be putting it into my savings.

"The amount of support I've had was just amazing, I was really grateful. I am absolutely thrilled to have won and I look forward to coming back next year to try to retain it."

Rednall will make a swift return to action on Friday evening when she competes in the national fours.