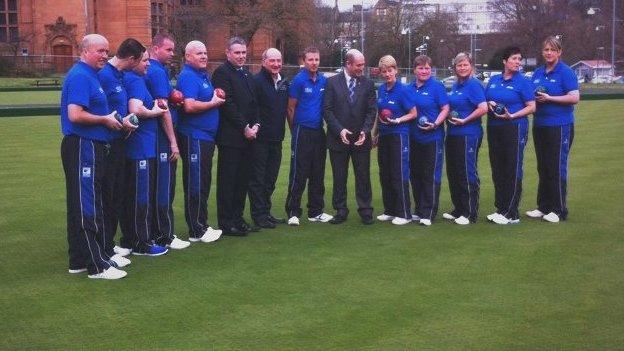 Alex Marshall will have the chance to secure a third Commonwealth Games gold medal when he competes for Scotland at this summer's event in Glasgow.

He won the pairs event in Manchester in 2002 with George Sneddon and again in Melbourne with Troon's Paul Foster.

Marshall and Foster have been named in the 10-strong host nation team which comprises five men and five women.

The team is led by Bowls Scotland head coach David Gourlay, who will decide which two events out of the four available - singles or fours and pairs or triples - each bowler will contest.

He will hope that the players' experience counts, with nine of the 10 players contributing to a total of 18 previous Commonwealth Games appearances.

"This is the culmination of an 18-month training and selection process and choosing the team has been made more challenging because the whole elite squad committed fully to the programme and everyone satisfied the selection criteria," said Gourlay.

"I firmly believe the 10 players we have selected will give us our best opportunity to win medals in Glasgow this summer.

"This is our best-prepared bowls team and we look forward to being part of what we believe will be the most successful Games ever for Team Scotland."

The competition will be played on the lawns at Kelvingrove in Glasgow's West End, with the Kelvingrove Art Gallery and Museum providing an impressive backdrop.

Scotland have won 28 medals, including 13 gold, in previous Commonwealth Games, but the team returned empty-handed from Delhi in 2010.

Under Gourlay, Scotland's bowlers have enjoyed success since. In 2012 they won six medals at the World Championships in Adelaide, three of them gold.

Marshall is the only person to have won five world indoor singles titles. His tally of 19 world titles is a record.

He and Foster are the current World Pairs Champions outdoors (2012) and indoors (2013), the first time in the history of the sport that one pair have held both indoor and outdoor world titles simultaneously.

Foster is the current International Open Singles Champion and world ranked number one.

Lauren Baillie from Port Seton, East Lothian is the only new face amongst the bowlers and will make her Commonwealth Games debut in Glasgow.

Team Scotland Chef de Mission, Jon Doig said: "This team has one of the strongest pedigrees we have ever seen with consistent success at international level both indoors and outdoors.

"I am sure their collective skills and experience will stand them in great stead for this summer's Commonwealth Games when they will have the added benefit of huge home support."

This is the first team announcement of 2014 and brings the total Team Scotland numbers selected so far to 46, with an anticipated final team size in the region of 270 athletes.