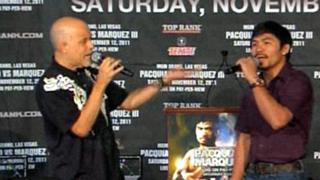 Boxer Manny Pacquiao serenades the press with a rendition of "Sometimes When We Touch" with Canadian songwriter Dan Hill.

The song was a hit for Hill in the late 1970s and is apparently one of Pacquiao's favourite tunes.