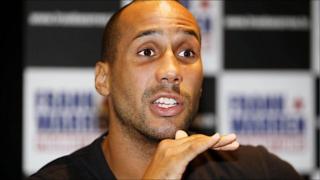 DeGale lost his British super-middleweight title to Groves in May but, with Groves having now signed with Frank Warren, a rematch looks more likely.

The 2008 Olympic middleweight champion believes the fight can take place in the "early part of next year" and believes if he wins the European title on 15 October, "there will be no-one for him [Groves] to fight apart from me".