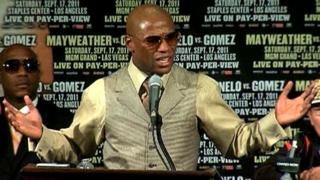 Floyd Mayweather defends his knockout of Victor Ortiz in which he appears to land the decisive punch of their WBC welterweight title fight whilst his opponent is not defending himself.

The five-division world champion also sticks by his comments in a post-fight row with 80-year-old American broadcaster Larry Merchant in which he called for the veteran's sacking claiming he knows "nothing about boxing".

The victory came in the fourth round and, with a long-awaited fight against Manny Pacquiao still to be agreed, Britain's Amir Khan is hopeful of a clash with Mayweather next year.