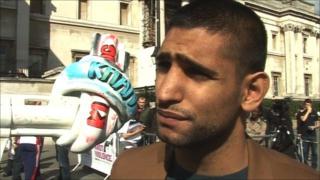 Khan says Ortiz should have known better than to take his eyes off his opponent, and the Brit admits he would have thrown a punch too.

The WBA and IBF world champion adds that he wants to see Mayweather and Manny Pacquiao meet in the ring, but fears it will not happen.

Khan was speaking at the launch of Knot Violence, an anti-violence initiative.