WBO light-heavyweight champion Nathan Cleverly says he has gone from "strength to strength" since father Vince became his coach.

Cleverly, 24, quit Enzo Calzaghe's stable in 2008 and has secured World, European, Commonwealth and British titles in less than three years.

He will defend his WBO belt against Tony Bellew in Liverpool on Saturday.

"My career has really developed since I changed camps and [started] being trained by my dad," said Cleverly.

"My boxing has gone from strength to strength.

Cleverly was set to challenge for the British title when he decided to change camps after three years under Calzaghe's tutelage.

At the time, he said he feared the legal feud between the trainer and promoter Frank Warren could damage his career prospects.

The pair spent several hours together as sparring partners and Cleverly says those years are now proving invaluable as he aims to reach similar success.

"I learnt a lot," said the unbeaten champion from Cefn Fforest. "He was a big inspiration being a Valley boy like myself. 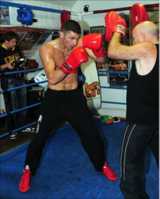 "Seeing how a world champion trains and how he handled the pressure, I learnt a lot from that."

Cleverly's next assignment is a second defence of his WBO crown in a highly anticipated domestic fight with Liverpool's Bellew at the City's Echo Arena.

"It's been a great rise for me," said Cleverly, who has won all of his 22 professional bouts, 11 by knock-out.

"I've built up great momentum on my title run and I've basically achieved my dream now.

"Since I started boxing I always believed I could do it. Making it reality now is a real pleasure.

"On Saturday night I really want to look good and do the business against Tony Bellew in his own backyard.

"Once I do a real good job there we can look to unify the light-heavyweight division. The sky's the limit then."

Should he beat current British champion Bellew, Cleverly has said his dream would be a bout against American Bernard Hopkins, who lost a split decision against Calzaghe in 2008.

Hopkins, 46, defends his WBC and IBO light-heavyweight titles against Chad Dawson in Los Angeles on Saturday.

Promoter Warren has said he hopes to arrange a fight for the winner of the Cleverly-Bellew contest to face Dawson or Hopkins.

"He's promised that and, once he's promised something, he generally makes it happen," said Cleverly.

"But obviously I've got business to take care of with Tony Bellew and Hopkins has got a real tough fight with Chad Dawson. Anything can happen in those fights.

"But if we both win [then] it's a potential blockbuster down the line."