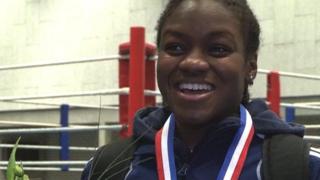 British boxer Nicola Adams believes she is in a strong position to qualify for London 2012 after clinching the European flyweight title in Rotterdam, Netherlands on Saturday.

Adams became the first British woman to win a major boxing title with a 15-8 victory over French boxer Sarah Ourahmoune.

The 28-year old admits she is "overwhelmed" to have won the gold medal, but says she "refused to be denied" and simply "wanted it more" than her opponent.