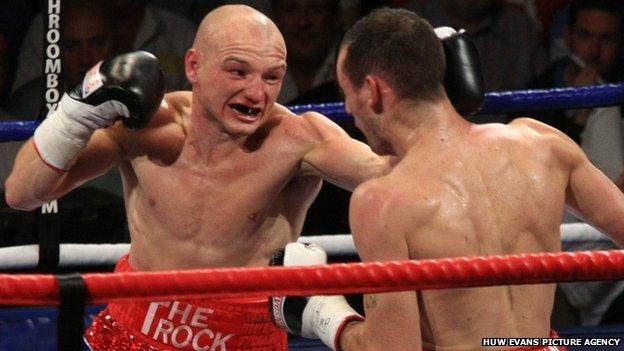 The Welshman turned down a fight with WBO interim champion Ricky Burns and fights Frenchman Mazaache on 23 March.

Rees beat Andy Murray to claim the title in June but his first defence ended in a draw after an accidental clash of heads with Derry Mathews.

Referee John Keane ended the fight in the fourth round after Mathews suffered a broken nose.

With fewer than four rounds being completed, the fight did not go to the judges' scorecards so Rees kept his belt via a technical draw.

The former WBA light-welterweight champion has lost just once in 37 bouts and is targeting another world title shot in 2012 after the 31-year-old's first fight abroad against Mazaache.

"Gavin has been in the gym on and off since the Mathews fight," added trainer Lockett.

"The Gavin Rees of old is long gone, he's grown up a lot and he knows that being out of the gym when you haven't got a fight is not my way.

"So he's been training hard and he looks in fantastic shape - I wish the fight was this week really as he looks superb.

"Gavin has slowed himself down and he's working at the pace I want him to. His conditioning is fantastic and we'll just be fine tuning things in the next month."

Mazaache has a record of 21 wins from 30 bouts and claimed the European belt by beating Jon Thaxton in February 2009.