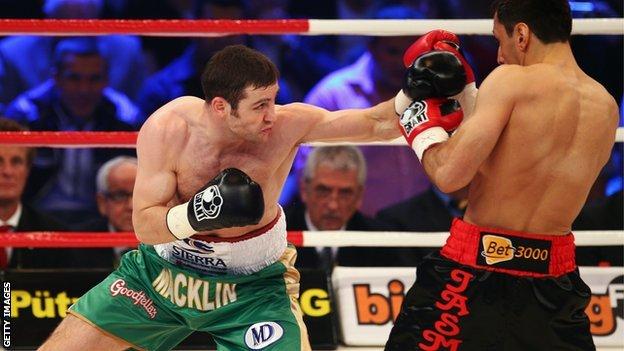 Birmingham middleweight Matthew Macklin says he is ignoring the hype around Sergio Martinez and is sure he has the measure of the Argentine.

Macklin, 29, meets Martinez, the WBC 'diamond' champion, in New York on 17 March and says he cannot wait for it.

"It's a difficult fight, no doubt, but he's not unbeatable. I have the tools to beat him," Macklin told BBC WM.

"The media can build you up but no-one's a monster, he's a man, and when he gets hit on the nose it'll hurt."

Martinez, 37, is widely considered to be among the best pound-for-pound fighters in the world and Macklin knows he has to be at his best.

"He's a really good fighter, what he does he does well," the Solihull fighter continued.

"He's slick, an awkward southpaw, lots of lateral movement and has good reflexes and good timing."

Although no official world title is on the line following Martinez's stripping of the WBC belt for not meeting their mandatory challenger, Macklin is drawing confidence from the Argentine's last performance against Britain's Darren Barker in October 2011.

"I think he is a bit better than he was then but I took encouragement because he still showed that, if you get your tactics right, you can put it on him and he can be hit," Macklin said.

Macklin has bided his time waiting for a crack at Martinez after impressing the boxing fraternity in his controversial defeat against WBA champion Felix Sturm in his last contest in June 2011.

He is now based in New York and he says the move is really benefiting him.

"I feel like I'm getting better and better. I've had frustrating times when I've been inactive but I feel that's kept me fresh for all these years.

"I feel like my hand speed's improving and I'm getting sharper and the reflexes are better, I'm just becoming a better fighter."

"The stage is set for me to go and beat Sergio Martinez and I'll just explode overnight," he concluded.