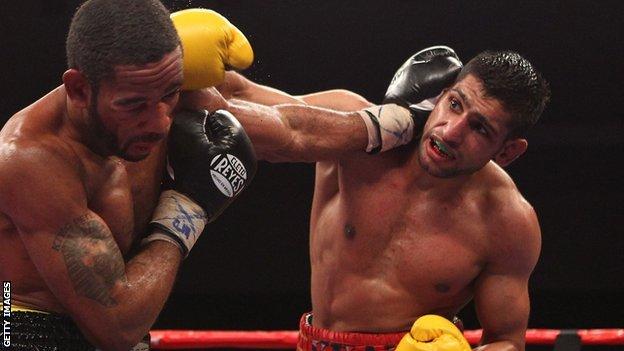 Amir Khan has confirmed that his rematch against Lamont Peterson will take place on 19 May in Las Vegas.

Khan, 25, appealed against the loss, citing concerns about points deductions by the referee, but dropped his claim.

"This time there will be no mistakes. I will either knock the guy out or win convincingly on points and bring the titles back home."

Khan said he was happy to secure the rematch after weeks of negotiations.

"I think there must have been a fear element there [for Peterson]", he said. "He knows he got beat first time and then wanted to keep hold of the titles.

"The amount of money we offered him was hard for him to turn down.

"[On Thursday] he signed the contact. If he hadn't signed it, I would have moved up a weight division. He came to his senses and signed on the dotted line. I would have liked it to be held in England but he didn't want to come here."

Khan argued afterwards about the behaviour of the referee, then complained about the scorecard and finally they complained about the appearance of a one-time mystery man later revealed to be Mustafa Ahmeen at ringside. They weren't really able to pin anything on him but it would all revive the controversy around the fight, and controversy sells in boxing and it has built the rematch into a much bigger fight than the original fight. Lamont Peterson was being talked about as a possible opponent for Floyd Mayweather, also Manny Pacquiao. Significantly this week, Pacquiao agreed terms to fight Timothy Bradley so the options were dwindling. Having said that he's got a terrific fee here, a significantly improved contract compared with the one he had for the first fight.

The pair will fight for a second time at Las Vegas's Mandalay Bay Hotel after their first match took place in Peterson's hometown of Washington, DC.

The WBA ordered a rematch earlier this month, claiming there were "multiple irregularities" in the first fight, and giving Peterson 180 days to agree terms with Khan for a new contest.

Bolton fighter Khan was initially unhappy with referee Joseph Cooper for deducting two points for pushing, and the way he judged the fight.

In the days after the bout, Khan also used his Twitter account to ask a series of questions about a "mystery man" who was seen at ringside talking to Michael Welsh, the WBA scoring supervisor, during the fight.

The "mystery man" was subsequently named as Mustafa Ameen who attended the fight as a guest of the IBF but had no official role that evening.

In an exclusive interview with BBC Sport last month, Ameen claimed he was only correcting mistakes and that Welsh was complaining of feeling unwell.