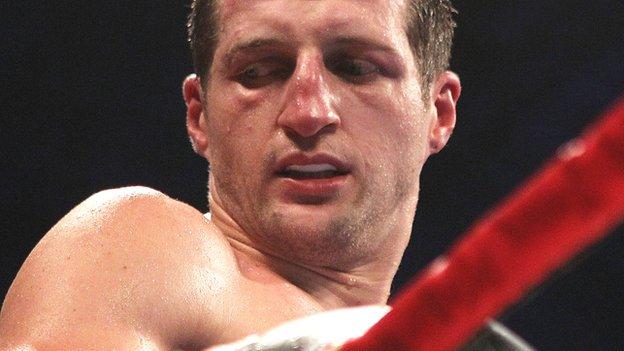 Carl Froch has been made mandatory challenger to IBF super-middleweight world champion Lucian Bute and the bout could well take place in Nottingham.

Froch, who lost to Andre Ward in the Super Six final in December, is eager for his next fight to be at home.

The 34-year-old's promoter Eddie Hearn is hopeful talks with Bute's team will lead to a home and away double-header.

The Nottingham Arena has been booked for 5 May and Hearn said "positive discussions have been ongoing".

Hearn said he hoped Bute will agree to fight in the city, with Froch heading to Bute's home country, Canada, later in the year.

"It is Carl's dream to have his next fight in the UK and that is something very important to both of us," Hearn added on the Matchroom Boxing website.

"I believe we can bring Lucian here in May and we will be happy to give him the rematch in Canada once Carl has taken the IBF title from him."

Froch first won the WBC super-middleweight title at the Nottingham Arena in December 2008 when he won a unanimous points decision against another Canadian, Jean Pascal, after a thrilling 12-round battle.

He retained the title at the same venue 10 months later with a split-decision victory over Andre Dirrell of the USA, but none of his four fights since then have taken place in the UK.

The last, against Ward, was staged in Atlantic City and Froch suffered only the second defeat of his 28-fight professional career.