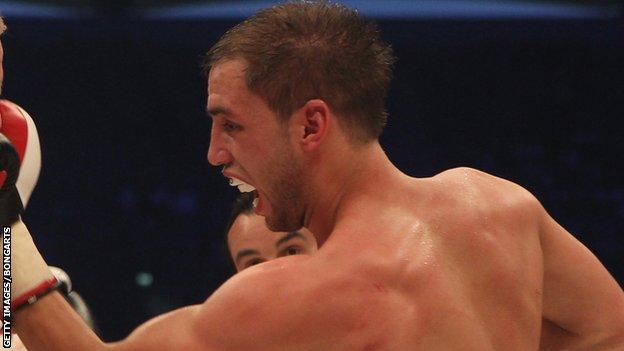 The 24-year-old, unbeaten in 13 fights, made a blistering start to his professional career, but has struggled for momentum in the last 12 months.

And now he hopes to return to form, starting with a bout against Tanzanian bantamweight Fadhili Majia on 2 March.

"This is going to be the year that I come out and show what I can do," he told BBC Three Counties Radio.

"At the minute the world is my oyster. I'm unbeaten. There's some weight issues I'm ironing out and then I'll be ready to go."

Sexton rose to prominence in 2010, when he claimed the English flyweight crown by beating incumbent Usman Ahmed with a first-round knockout.

But the Cheshunt fighter failed to advance up the ladder in 2011 as he changed his trainer, management and weight.

The clash against 18-year-old Majia, the reigning Tanzania flyweight champion, at the Troxy in London will be fought at bantamweight.

"I was struggling with the style I was trying to adapt to. It didn't really suit me," Sexton added.

"There have been weight issues and training issues. Everything's been up in the air.

"I wouldn't say I've lost confidence, but I've lost the steam I had. I was on a roll but I've come to a halt.

"I want to notch up the wins and be knocking on the door for a title fight by the end of the year."

Ideally for Sexton, that would be against Lee Haskins, the current British and Commonwealth champion at super-flyweight.

"He's moving on to world honours so really I want to jump in behind him," he said.

"If I don't get the chance to fight him I'll jump in against whoever's next."