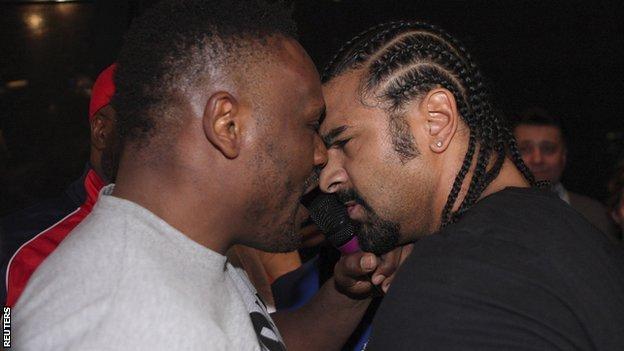 British boxers Dereck Chisora and David Haye were involved in a brawl at the post-fight news conference in Munich after Chisora was defeated by Vitali Klitschko.

BBC Sport's Ben Dirs was at the scene, and this is how the drama unfolded...

Bernd Boente, manager of Vitali and Wladimir Klitschko: With the bad experience we've had with British fighters, we will now look for other countries. Contrary to David Haye, Dereck Chisora really went for it. He really tried.

David Haye (from rear of the room): You don't want to fight David Haye, no?

Boente: You had an offer. You didn't accept it. Now you are out. You are out. Out, out, out. You cannot talk yourself back into the fight; you have no belts. Chisora showed heart, contrary to you. You showed your toe [referring to Haye's toe injury].

Haye: I accepted your offer in December.

Dereck Chisora: We'll get it on in London - be quiet. David Haye is an embarrassment, Sky Sports don't do Box Office any more because of David Haye. He messed it up for all those young fighters coming through. I'm going to give you two slaps for that. If Haye is a fighter, he should fight me.

Chisora's trainer Don Charles: Be quiet, can security get him out of here?

Haye: Vitali said after his last fight, 'I want to fight David Haye'. Where is he now? He said he wanted to fight me, I agreed the money, I agreed everything in December.

Haye: You've lost your last three fights, you lost to Tyson Fury. You're a loser.

Chisora leaves his seat and approaches Haye at the back of the room, where a melee ensues. Haye at one point picks up a video camera tripod and swings it.

The two are eventually pulled apart before Chisora returns to the front of the room.

Chisora: (Referring to Booth's cut) I'm sorry about that. Adam, your fighter glassed me.

Booth: I want to know who glassed me.

Chisora: As you were trying to hold your fighter away, he [Haye] probably glassed you by mistake.

Booth: You hit me with a bottle.

Chisora: David had a bottle in his hand.

The two are separated before Booth addresses Vitali Klitschko.

Booth: Vitali, you are a great fighter but your manager is an embarrassment to the sport. Congratulations for winning.

Chisora: (Addressing Booth) Either we do it in the ring or outside of the ring. Because I want him. If David don't fight me, Adam, I am telling you the God's honest truth, I am going to physically burn him. So you tell him I said that. I am going to find him.