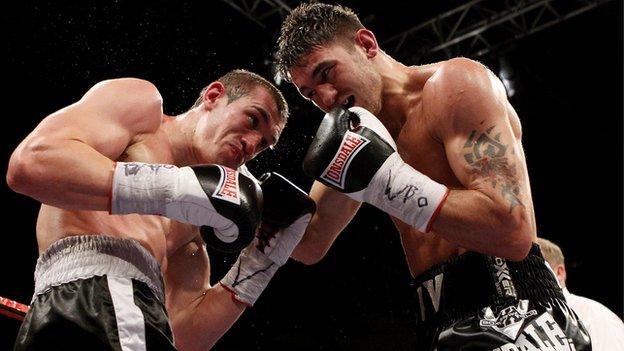 Although Karpency, who has never been stopped, took Cleverly the distance, the judges' decision was unanimous.

"He was tough but the most important thing was returning home as world champion," said Cleverly.

"Out of every fighter I've fought, he punched the hardest. There's plenty more to come from me."

Cleverly, who achieved his aim of joining the Triple Crown-winning Wales rugby team in securing success on the international stage, won every round as the three judges scored the fight 120-108.

"It was a nice performance and there's plenty more to come from me," he added.

"It was a nice performance. I started off not too careless or reckless and I thought he was wilting. But he relaxed on the back foot and didn't waste energy.

"My last 11 fights have been on the road. It was an electric atmosphere and I absolutely loved it. I hope the fans enjoyed it."

Cleverly, 25, wanted to put Welsh boxing back on the map in his third defence - his first fight on home turf in almost four years.

It was also the first world title bout in Wales since Gavin Rees was beaten by Ukrainian Andreas Kotelnik in April 2008.

Karpency, 26, achieved his early aim at the Motorpoint Arena by largely silencing Cleverly's fans, beginning with a venom that belied his pre-fight status as underdog.

The Welshman took an early straight shot that shook him and underlined the threat he faced.

But, instead of heeding his corner's advice "not to get involved", Cleverly accepted Karpency's invitation to go toe-to-toe in the early rounds.

Ahead of the fourth round Karpency was showing signs of fatigue and his opponent began to impose his class on the contest.

However, Karpency remained a confident opponent as he responded to Cleverly's aggression in kind in the fifth round.

Cleverly caught his rival with a good left in the sixth round, but his opponent continued to prove durable.

The eighth round lacked spark as Cleverly's approach altered to err on the side of caution against an opponent who had the potential to deliver a knockout blow.

In the ninth Cleverly made good contact with a combination that got his fans on their feet.

But Karpency spun away and eluded further danger and the contest continued without either boxer seriously threatening to stop the other.