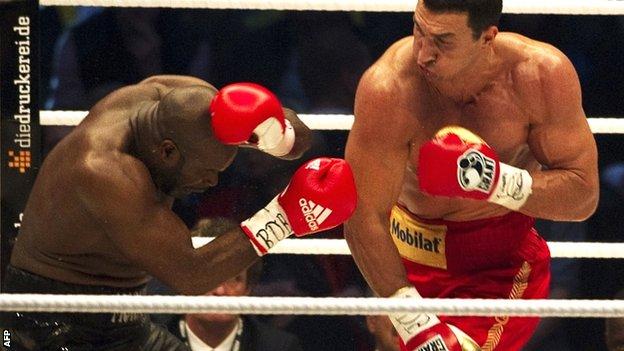 Klitschko's 50th knockout was secured with ease as Mormeck failed to cope with the Ukrainian's power.

Mormeck first hit the floor in the second round after a Klitschko right.

Klitschko, who ended the fight with a right-left combination, said: "I'm delighted to get the 50th knock-out of my career. I promised and I delivered."

In the days leading up to the fight at the Esprit Arena in Dusseldorf, 35-year-old Klitschko was forced to defend the quality of his opponents following criticisms that former cruiserweight world champion Mormeck would not provide a big enough challenge.

And Klitschko, who was defending his WBA, IBF and WBO belts, overpowered his challenger immediately, emphasising the mismatch in weight and experience.

Mormeck, 39, endured a one-sided first round that saw him trying to avoid and then contain the champion's lengthy jab, before he finally succumbed to a right-hander in the second that saw him momentarily floored.

Klitschko never looked in danger and, after a scrappy third round where Mormeck managed to hold his own, the fourth saw Klitschko dispatch his opponent with the devastating right-left combination.

Puerto Rican referee Luis Pabon counted out the challenger, who was making only his fourth appearance as a heavyweight, leaving Klitschko to celebrate a 57th career win.