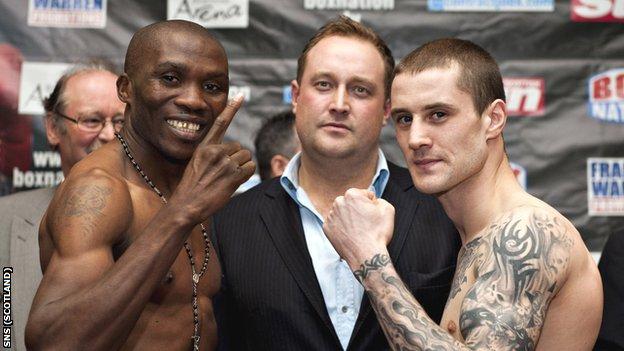 A cross-border bout with Essex fighter Kevin Mitchell could await Ricky Burns if he defeats Paulus Moses at Braehead Arena in Glasgow on Saturday evening.

Burns faces a tough challenge in his defence of his WBO world lightweight title against the Namibian, who has lost only once in a 29-fight career.

"It is definitely one of his hardest fights," said Burns' trainer Billy Nelson of 33-year-old Moses.

"But the Mitchell fight will eventually happen; it's an easy fight to make."

Nelson trains Burns at his Fighting Scots gym in Mossend, Lanarkshire, and his confidence that the bout with 'The Dagenham Destroyer' will go ahead is based on Burns and Mitchell sharing the same promoter, Frank Warren.

"We've already sparred with Kevin Mitchell and Kevin would have nightmares about it.

"We'd love to bring it up to Scotland. It would be fantastic but that is further down the line.

From the first punch that he throws in the changing room until the end of the fight, he is a different character. It's Jekyll and Hyde, basically

"We need to concentrate wholly on Paulus Moses tonight."

Nelson is wary of the big-hitting African, who will face a wall of noise as 6,000 fans cheer on the home favourite in his first defence since beating Michael Katsidis at Wembley for the interim version of the title in November.

Burns became the full-blown champion when the previous holder, Juan Manuel Marquez, announced he would not be dropping back to lightweight to defend his belt.

"The boy's record speaks for itself," said the trainer of Moses.

"We are up against a guy who has very fast hands. He has a good, long straight right hand, which has knocked out 19 of his 29 opponents.

"But if you have an in-depth look at his opponents they are not of the calibre of Ricky Burns.

"What we've got to remember is that we've got the world champion, a genuine world-class fighter, and I believe he will prove that.

"Ricky's strengths are his speed, his boxing ability, his boxing brain and his fantastic engine. He can go the full 12 rounds, no problem."

Many people who meet Burns are struck by his modesty. He is friendly and approachable. But Nelson says that changes in the moments before he steps into the ring.

"He is the nicest guy that you would wish to meet in boxing," claimed his trainer.

"We do 15 minutes on the pads before we go into the ring.

"From the first punch that he throws in the changing room until the end of the fight, he is a different character. It's Jekyll and Hyde, basically.

"I always knew he had ability, when he first came to the gym, even though he wasn't a champion.

"I've got great belief in his ability and he has faith in me. It goes both ways."