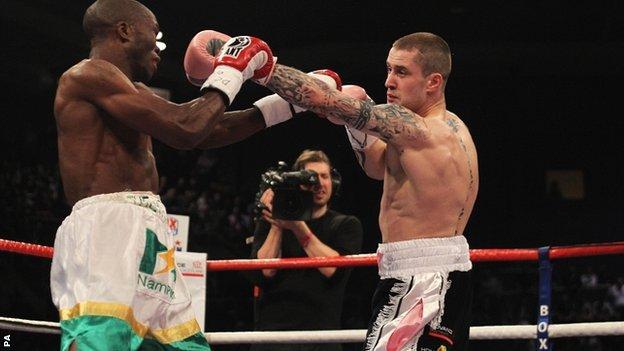 Scotland's Ricky Burns retained his WBO lightweight crown with a unanimous points win over Paulus Moses at a packed Braehead Arena in Glasgow.

The Namibian challenger, who fell to 28 victories from 30 fights, stepped up his attacks in the final rounds but it was too little, too late.

It was Burns's first title defence in the lightweight division.

"I could see how he had 19 knockouts from his 28 wins," said the Coatbridge fighter. "He could punch.

"A few times he caught me on the shoulder, the same spot. My left arm was dead.

"I was just trying to pepper it out and keep my distance. It was a tough fight - we expected that, and I'm just glad I got the win."

The Coatbridge fighter, who became full champion after Mexican great Juan Manuel Marquez moved up in weight in January, found it difficult for most of the fight to pin down Moses.

Moses took to the centre of the ring from the first bell but Burns unleashed a couple of decent combinations to ignite a lively home crowd.

The champion got his supporters going again in the third as he rattled his opponent, body shots and left hooks doing the damage.

But Burns was unable to take full advantage and allowed Moses a strong finish, the 33-year-old finding Burns's chin in the ninth.

But the champion withstood the late challenge and saw out the fight to complete a classy and disciplined win - and is now targeting a bout with Essex fighter Kevin Mitchell.

Mitchell, 27, fought Australia's Michael Katsidis for the WBO interim lightweight title in 2010 only to be stopped in three rounds.

However, he stopped Manchester's John Murray in eight rounds last July to put himself back into world title contention.