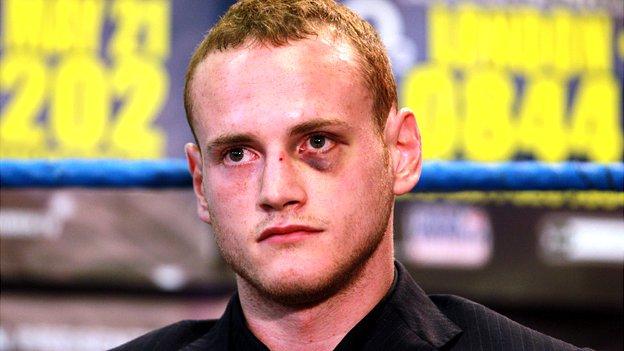 British super-middleweight champion George Groves has been forced to pull out of his title defence against Kenny Anderson because of a back injury.

The fight, scheduled to top the bill on Friday at Wembley Arena, will be rearranged by promoter Frank Warren.

Groves, 23, stopped Anderson in their previous bout in 2010 and beat former Olympic champion James DeGale last May to win his British belt.

Every fighter knows when you get injured you don't just give up. You give yourself every chance to recover and fight. I didn't recover

"I suffered a back injury sparring with Eamonn O'Kane and haven't trained properly since," the Londoner elaborated.

"I failed a fitness test today and decided to withdraw.

"Every fighter knows when you get injured you don't just give up. You give yourself every chance to recover and fight. I didn't recover."

Anderson, who at 29 has won his last three fights, has been angered by the late withdrawal.

"I am gutted," the Edinburgh-based boxer told website Boxing Scene.

"I don't believe in my heart that he is injured. That's the feeling I've got. I don't think they wanted to have this fight.

"George has heard about how I'm doing, about the condition that I'm in, and he's bottled it."