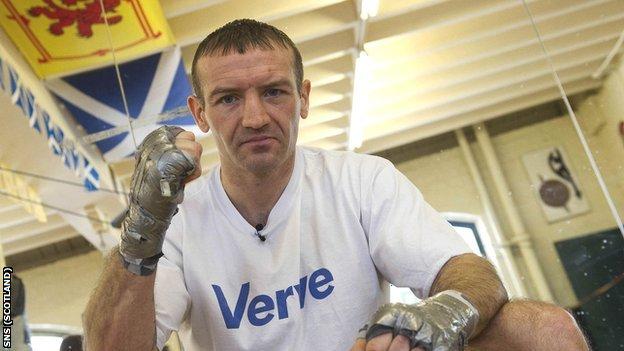 Scott Harrison's planned comeback fight next weekend has been cancelled following his arrest for alleged shoplifting from a Glasgow supermarket.

The former WBO world featherweight champion was due to fight for the first time in seven years in Blackpool.

But his arrest early on Wednesday over an alleged theft and minor public disorder offence has scuppered his return against an unnamed opponent.

Harrison's manager Frank Maloney says he has decided to drop the boxer.

Harrison, 34, last fought in 2005 in a successful title defence at Braehead Arena but he was stripped of his title in December 2006 after failing to make the weight for a bout against Nicky Cook.

The Glaswegian was released from a Spanish jail last year after serving a sentence for theft and assault.

Peter Harrison, his father and trainer, told BBC Scotland: "The legal wrangle over who was to promote Scott's up-coming comeback fight has caused a great deal of stress and anxiety to Scott which has been shown in the last 48 hours.

"Scott is now taking a period of time to plan his boxing future.

"We will be making no more comment at this time and ask the media to respect our privacy."

The bout on 31 March was already the subject of controversy as rival promoters Frank Warren and Maloney contested to whom the boxer was contracted.

But when Harrison does make his return, that matter should no longer pose a problem because Maloney has told BBC Scotland that he was dropping the boxer from his stable.

He said he would remain friendly with Harrison and his family but maintained that he could not deal with the stress involved in representing him.

The British Boxing Board of Control said it could make no comment at this time but did confirm to BBC Scotland that Harrison would not appear in Blackpool.