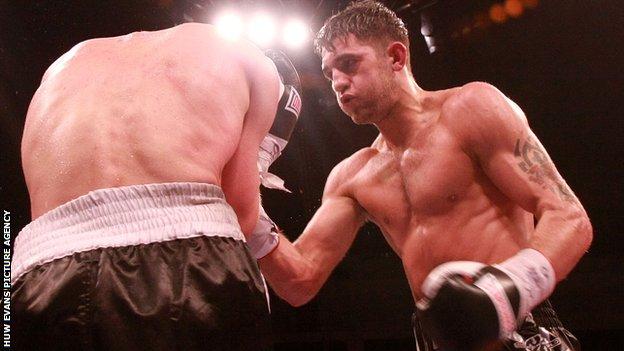 WBO light-heavyweight champion Nathan Cleverly is hopeful the dispute over his next opponent will soon be resolved.

The WBO have refused to sanction Cleverly's proposed world title defence against Robin Krasniqi at London's Albert Hall on 28 April.

They have told the Welshman he must fight the mandatory challenger Dmitry Sukhotsky.

"I think something will be resolved," Cleverly told BBC Sport Wales.

"We're just sorting out the conflict now and the issue with the opponents."

The WBO gave Cleverly permission to fight Tommy Karpency in February as long as their champion's next defence was against their mandatory challenger.

Cleverly was told to fight Russian Sukhotsky within 120 days of beating American Karpency on points at Cardiff's Motorpoint Arena.

Promoter Frank Warren wanted the undefeated Welshman to fight Krasniqi in what he was hoping to be the first world title show at the Albert Hall in over a decade.

The WBO say Cleverly's Krasniqi bout "cannot and would not be sanctioned" and the the bout on 28 April could go ahead as a non-title fight.

But if Warren wants Cleverly's fourth defence to be a WBO world title fight, the opponent might have to be changed to 30-year-old Sukhotsky.

"It's possible it could be a non-title fight or Sukhotsky could come over early to take the fight," added Cleverly.

"But I think that would take more negotiation so I can't see that happening.

"I've got a mandatory challenger I've got to fight but ultimately we've got up until June to fight him.

"In the meantime we're trying to get a quick defence in April. The plan is to get this quick defence and then fight the Russian mandatory.

"As long as we explain to the WBO that we're going to take this fight and before June we will fight the mandatory challenger [then] that's the best way around it."

A spokesman for Frank Warren confirmed the British promoter is in negotiations with the WBO in the hope of resolving the impasse.