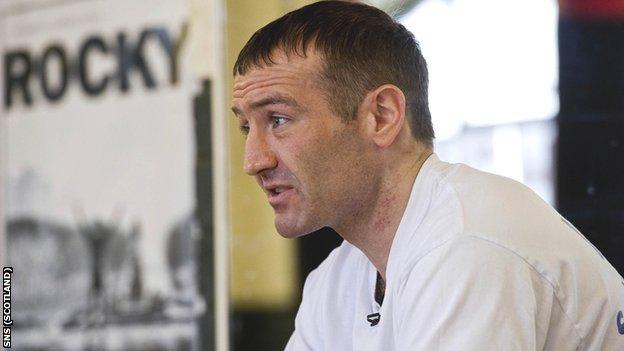 Promoter Frank Warren reckons troubled fighter Scott Harrison must sort out his life before he enters the ring.

"Before he even considers boxing, he has these demons to conquer outside of the ring," Warren told BBC Scotland.

"Until then, he shouldn't be allowed to fight. I do have a contract with him but he needs to get help and quickly."

Harrison was scheduled to make his comeback after a seven-year absence from the ring in Blackpool on 31 March.

He had regained his licence to fight at the end of last year after a spell in prison in Spain.

He was stripped of his title in 2006 after failing to make the weight for a defence against Nicky Cook and had his licence revoked by the British Boxing Board of Control after being found guilty of bringing the sport into disrepute.

Kevin Mitchell is an opponent we are looking at and, providing he is sensible, maybe we could make that fight

"Scott is not a baby," added Warren on Radio Scotland's Sport Nation. "He is 34, he should know better.

"When fighters go off the rails or lose all their money, it's usually after they have finished fighting.

"Unfortunately, Scott did it while he was world champion.

"I can't recollect a world champion being in that position before. He had everything going for him.

"I think it is very sad for Scott. He has got himself into a problem again."

Harrison's comeback bout was under threat because Warren and rival promoter Frank Maloney were contesting to whom the boxer was contracted, but Warren believes the trouble might have been avoided if he had got back in the ring sooner.

"He should have been on the undercard of Ricky Burns' fight [on 10 March]," said Warren.

"Who knows, had he got in the ring then, maybe this would not have happened."

Maloney no longer wishes to represent Harrison because of the stress it involves, leaving the path clear for Warren.

But he wants to see the boxer's family help him before he fights again.

"The person closest to him was his trainer, his father [Peter].

"The only one who can deal with this is him, with the support of his close family.

"He has to face up to reality and stop looking for excuses."

Meanwhile, Warren said he had not yet decided on an opponent for WBO lightweight champion Burns, but felt it was unlikely to be an open-air bout, with Airdrie's Excelsior Stadium and West Ham United's Upton Park having been reported as possible venues.

"I can't say who it is going to be against yet but it will probably be in July," said Warren.

"Kevin Mitchell is an opponent we are looking at and, providing he is sensible, maybe we could make that fight.

"He has had problems outside the ring and he thinks he should be getting paid much more than Ricky.

"It's a struggle to make that one."

Warren maintained that he would like to stage the fight in Scotland, after his last fight at Braehead was a 6,000 sell-out, but Burns' wedding at the end of April and the earlier start to the football season in Scotland made a bout at the Excelsior Stadium unlikely.

And he added: "It could have been at Upton Park if it had been in May but the football season starts in early August. The pitches are being laid.

"I think we are going to miss the window on an open-air show."