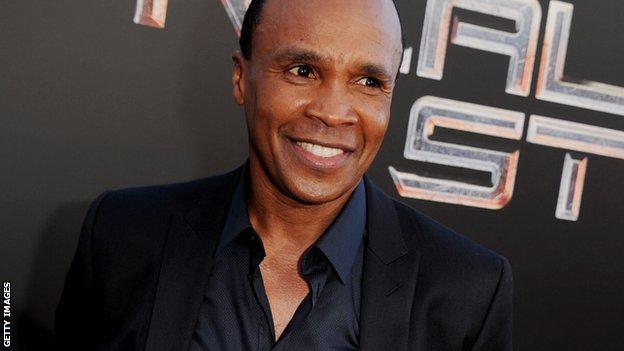 Boxing legend Sugar Ray Leonard has implored Floyd Mayweather and Manny Pacquiao to fight, for the sake of their own legacies.

Mayweather and Pacquiao are widely considered to be the two best pound-for-pound boxers on the planet but have been unable to negotiate a deal.

"This is for history, for people to say 'I remember when'. It's beyond money."

Plans for a fight between Mayweather, the American who has won world titles at five weights between super-featherweight and light-middleweight, and Philippine Pacquiao, a seven-weight world champion, fell through in 2010 when Pacquiao rejected his opponent's demand for random drug-testing in the build-up to the bout.

There have been repeated attempts to renegotiate the fight in the intervening months, but to no avail.

"When I decided to come back, everyone thought I was crazy. And for a while, I thought I was, too. I'd had one fight in five years and I was coming back to fight Marvin Hagler, a man who hadn't lost a fight since 1976, a man who had beaten everybody from Duran to Hearns."

The five men fought a virtual round-robin tournament through the course of the 1980s, making the failure of Mayweather-Pacquiao all the more frustrating for Leonard.

"Boxing is always taking black eyes, but this is the longest boxing has taken a black eye for," said Leonard, who fought and beat Hagler 25 years ago on Friday.

"From the 1990s back to the 1960s, there were great fighters, there was an abundance of talent. Now you just hear about Pacquiao and Mayweather.

"They are amazing guys who could have dealt with the guys in our era, but they've got to do what's best for themselves, and I don't mean financially.

"When someone comes up to you and says, 'you know what, I was with my grandfather when you fought Tommy Hearns' or 'when you lost that fight to Duran, my dad cried', those are special moments."

Meanwhile, Hearns's trainer Emanuel Steward told BBC Sport the failure of Mayweather and Pacquiao to meet in the ring made him fear for the future of the sport.

"Boxing's not in good shape. It's more of a business now and it's hurting boxing. We need to return to an era when the best fight the best and it wasn't all about money and egos.

"Unless some drastic changes come about, I don't like the way things are looking for boxing. There's not one dream heavyweight fight - you've got Wladimir Klitschko and Vitali Klitschko and nobody else. That's not good.

"What made that [1980s] era great was that they fought each other. They could have played politics but they were true warriors."

Steward, who also trained Britain's Lennox Lewis, added that the first fight between Leonard and Hearns in 1981 took less than a day to negotiate, from start to finish.

Steward said: "I could see something building up, so finally I called up [Leonard's manager] Mike Trainer and said 'Mike, it looks like the public wants to see Ray and Tommy fight and he said 'why don't we meet today?'

"So I jumped on a plane and we met at an airport coffee shop. Mike Trainer said 'what are you looking for for Tommy?' I said, 'I want $5m for Tommy'. He said 'have you lost your mind? How much do you think Ray should get?' And I said $8m.

"They were all shocked, they thought I was going to ask for more for Tommy. They stepped out for a minute, came back and said 'pal, you've got a deal'. I shook hands and flew back to Detroit on the exact same plane that I came on - that's how quick the deal was made.

"One of the biggest fights in history was made on a quick handshake in about 30 minutes. There were no egos involved. We knew the public wanted it.

"The money is there [for Mayweather-Pacquiao], the two guys would make a minimum of $50m apiece, and it still can't be made because of egos. Times have changed and it really frustrates me because I remember how easy it was for me to make the fight with Ray."