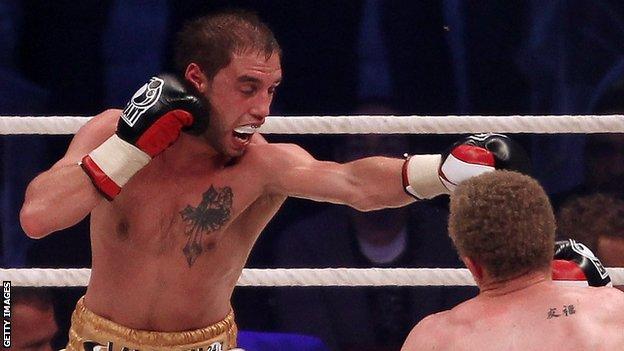 Cheshunt's Ashley Sexton believes everything is in place for him to become a future world champion, after signing with Frank Warren Promotions.

The former English flyweight champion is unbeaten in 14 professional fights.

"Generally, if you want to fight and win a word title the Warrens are the ones you want to be with," the 24-year-old told BBC Three Counties Radio.

"We've spoken about a lot of things. We even spoke about the WBC title. That's the ultimate goal."

Sexton, who has dropped the English flyweight title to concentrate on the super flyweight division, made a successful return to the ring in March after eight months without a bout, beating Frenchman Thomas Masson in a convincing points victory.

His deal with the Warrens - which will see him managed by Frank Warren's son Francis - guarantees him at least five fights a year over the next three years.

And Sexton is confident that is enough time to propel him into world title contention.

"I'm only 24. I'm still a baby really. Over the next 18 months I'll be maturing a lot more and should be well within touching distance of a world title," he said.

"But what we're going to focus on first is the British Super Fly. I'd like to nail down the British and Commonwealth titles this year.

"I've watched world class fighting for so many years and I know that I'm capable of it.

"What I need to do is fight a world class fighter to show that this is where I'm meant to mix it.

"We're on the right track. It's just a matter of time."

Sexton, who has 12 wins (five by knock out) and two draws from his 14 fights, is lined up to face an unnamed opponent at London's Troxy on 3 May.