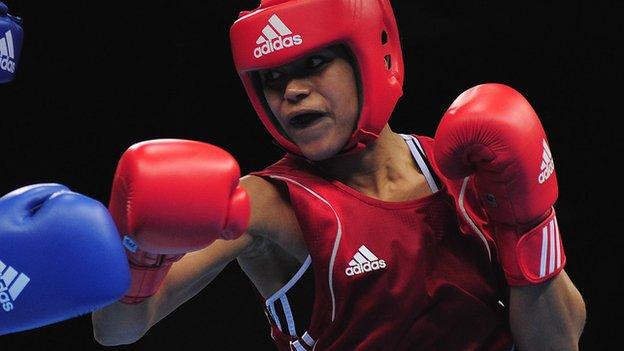 Middleweight Savannah Marshall, lightweight Natasha Jonas and flyweight Nicola Adams have the chance to qualify for the London Games.

Jonas got the vote over Chantelle Cameron and Amanda Coulson after a series of impressive performances.

"Nicola and Savannah won silver medals at the last World Championships [in 2010] and Natasha has secured the berth at lightweight after some very good performances in the last few months."

To qualify for the Games, the trio will need to make the semi-finals or be among the last four Europeans in the quarter-finals of their category.

Liverpool's Jonas, 27, won bronze at the 2011 European Championships and gold at last November's test event in London, where she overcame boxers ranked two, four and seven in the world.

"Just winning the opportunity to qualify for the Olympics, ahead of two superb boxers like Amanda and Chantelle, is a great achievement," said Jonas.

"However, the challenge now is to do well at the World Championships and make sure I earn a place to compete at London."

The team will spend eight days acclimatising in a training camp before the tournament starts on 11 May.

Lisa Whiteside from Lancashire has been selected to compete for England in the featherweight (57kg) category, which is not included in the Olympics.