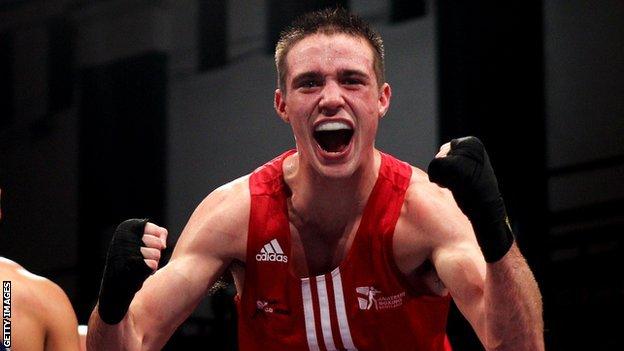 Prestonpans boxer Josh Taylor promises to give his all to win a gold medal at the 2012 Olympic Games.

The Lochend ABC lightweight clinched the sole Team GB spot for London by reaching the semi-finals of the European qualifying event in Trabzon.

A possible Olympic opponent for Taylor is the Ukrainian Vasyl Lomachenko, who won gold at featherweight in Beijing.

"I am very confident in my own ability that I can take him on and win it. I'll give it everything," said the Scot.

Southpaw Lomachenko, 24, was named the outstanding boxer of the 2008 Games and has been described as the best pound-for-pound amateur fighter in the world.

He will turn professional after fighting at lighweight at the Olympics.

Taylor scrapped to a 17-9 win over Armenia's Vladimir Sarukhanyan to reach the last four in Turkey and, with England's Sam Maxwell losing to Turkey's Fatih Keles, a place in Team GB was secured.

He will now fight Belarus boxer Vazgen Safaryants for a place in the final of the 60kg category, while Evaldas Petrauskas and Keles will contest the other semi.

"I woke up one of the happiest men on Earth. I don't think it has sunk in yet what I've done," Taylor told BBC Radio Scotland.

"All my hard work and dedication is starting to pay off.

"There is not a day in the past six months that I haven't thought about going to these Olympic Games.

"With it being the home Games, the support will be huge.

"It would be great to come away with a medal. It would be life-changing.

"If I did that, I'd be over the moon knowing that I was the best in the world in the amateur scene."