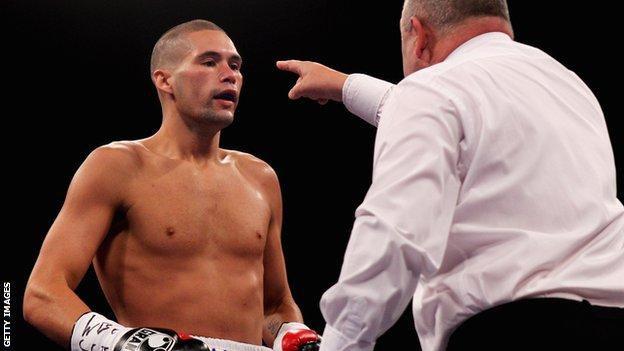 The 29-year-old Liverpudlian was fighting for the first time since losing his unbeaten record to Welshman Nathan Cleverly for the WBO title.

Bellew knocked McIntosh down in round four and then sent the challenger sprawling in round five before referee Terry O'Connor stopped the fight.

He improved his record to to 17 wins and one loss, with 11 knockouts.

Bellew gave Cleverly a tough fight for the world title last October, losing on points, but he does not appear to be in a hurry to set up a rematch.

"I don't need Nathan Cleverly to make a name for myself, or a living," he said after beating McIntosh.

"I'm supposed to be the one coming in off the loss and I'm fighting a former European champion and he's fighting 83 in the world.

The fight against McIntosh was originally scheduled to take place in Liverpool a fortnight ago but was postponed after the Norfolk fighter picked up a chest infection.

Bellew, who won the British title against Ovill McKenzie last July, called his rival "pathetic" for failing to turn up to Wednesday's press conference.

McIntosh then failed to live up to the challenge with the title holder landing punches at ease.

He was twice saved by the bell as Bellew went for the kill but in the end the bout was stopped 38 seconds into the fifth round, with the 32-year-old on the canvas.