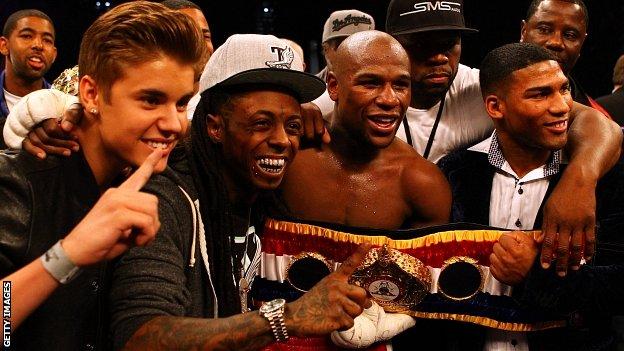 Floyd Mayweather held off Miguel Cotto to take the WBA light-middleweight title on Saturday and maintain his undefeated record.

The two fighters went toe-to-toe for several rounds before Mayweather took control and won by a unanimous decision, with two judges scoring 117-111 in his favour and one 118-110.

"I had to fight hard, suck it up. He [was] no pushover," said Mayweather.

The victory extended Mayweather's run to 43-0 with 26 knockouts.

Mayweather was on the offensive from the outset, landing a number of fast right hands and quick jabs.

Cotto, though, was showing a willingness to engage Mayweather in the centre of the ring, bringing him some wins in the middle rounds.

That forced Mayweather to change tactics and he started landing fast right hands from long range.

The pair exchanged vicious punches in the 12th round but Mayweather was landing the better shots and his superior hand speed and solid defence began to take its toll on Cotto and in the end it was the American who finished strongest to take victory.

"You're a hell of a champion," Mayweather told Cotto in the ring afterwards. "You're the toughest guy I ever fought.

"He came to fight; he didn't just come to survive. I dug down and fought him back."

Afterwards, Mayweather hinted that he would like to face Manny Pacquiao, his rival for the title of the world's best pound-for-pound fighter, in the ring next.

Mayweather had previously been in discussions to step into the ring with Pacquiao, but those negotiations fell through.

"I tried to make the Pacquiao fight and that didn't work, so I fought Miguel Cotto instead and gave the fans a great fight," he said.

For any fight to happen, though, Mayweather wants Pacquiao to first agree to blood and urine drug testing.

He added: "I want to fight Pacquiao but he has to take the test, and I'll fight him."

Mayweather's next fight will have to wait as he is scheduled to begin a three-month jail sentence on 1 June for misdemeanour domestic violence and harassment charges involving a former girlfriend.

The 21-year-old Alvarez defended his title for the fourth consecutive time, winning by unanimous decision as two of the judges scored it 119-109 while the third had it 118-110.

Alvarez's youth and power was too much for the 40-year-old Mosley, who no longer possesses the speed and reflexes he once had.

He certainly gave his all right until the end, ensuring he kept his record of having never been knocked out intact, but he has not won a fight in three years, losing five of his last seven.