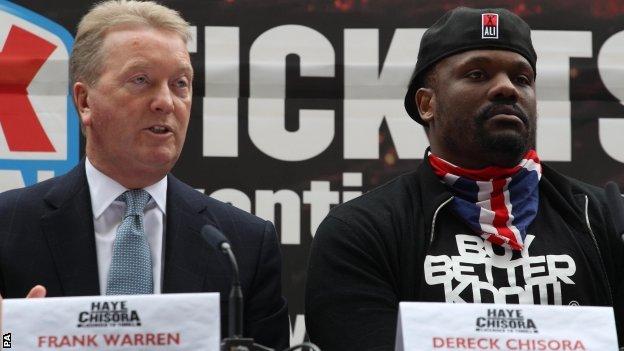 Frank Warren has written to boxing bosses to seek clarity over threats to remove his manager's licence.

The British Boxing Board of Control last week claimed any licence holder involved in the forthcoming fight between Dereck Chisora and David Haye would be stripped of their membership.

But Warren, who is Chisora's manager, has challenged the board's stance.

Neither boxer holds a British licence, with Chisora suspended in February after the duo brawled in Munich.

Warren's letter to the BBBofC

Chisora has appealed against the decision, while Haye has never renewed his licence after announcing his retirement from the ring in October 2011, following his defeat by Wladimir Klitschko.

However, Warren insists there is nothing illegal about Chisora's fight with Haye at London's Upton Park on 14 July being licensed by the Luxembourg Boxing Federation rather than the BBBofC.

His letter to BBBofC general secretary Robert Smith defends the validity of the fight and asks for written assurances that his licence will not be removed.

Warren insists that no BBBofC rules will be broken because the Luxembourg Boxing Federation is an affiliated member of the European Boxing Union and recognised by its British counterparts.

He argues that the BBBofC has previously licensed fights in Dubai, Egypt and Portugal, so there is a precedent for another boxing board licensing a fight in England.

He gives several reasons why the fight will not bring the sport into disrepute, including the Luxembourg Boxing Federation meeting all medical and safety requirements.

Warren's letter also notes that the BBBofC has no problem with the WBA licensing Floyd Mayweather to fight again despite his conviction for domestic violence.

More than 20,000 tickets were sold for the Chisora-Haye fight within two days of going on sale.