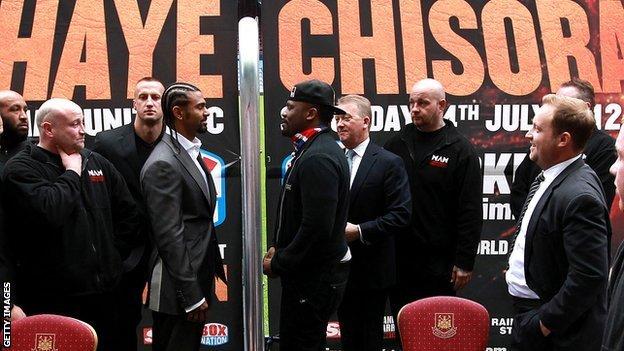 The World Boxing Council (WBC) says it will expel any person or organisation involved with the proposed fight between David Haye and Dereck Chisora.

However, the fight has been sanctioned by the World Boxing Organisation (WBO) and World Boxing Association (WBA).

The British Boxing Board of Control (BBBofC) had already threatened to remove licences from anyone involved.

"We will not condone such disgraceful behaviour [from Chisora]," said WBC president Jose Sulaiman.

"This boxer has no idea of what good behaviour is."

"You would have thought someone that has been involved in the sport for so long would have a lot more respect for the game. Greed and desperation meant they weren't prepared to wait"

However, WBO president Paco Valcarcel said it "has to go ahead and approve the fight" because the Luxembourg Boxing Federation (LBF), under which auspices Haye-Chisora will take place, is a member of the WBO.

Consequently, the pair will fight for the lightly regarded WBO International and WBA Intercontinental titles when they meet at West Ham United's Upton Park ground on 14 July.

Chisora challenged WBC world title-holder Vitali Klitschko in Munich in February but was consequently suspended indefinitely for his behaviour before and after the contest.

The 28-year-old was involved in a brawl with fellow Briton Haye at the post-fight news conference, having slapped Klitschko at the weigh-in and spat water at his brother Wladimir before the bout.

If the WBC follows through with its threat it would be a potential blow to Haye's career aspirations, the former heavyweight world champion having set his sights on a match with Vitali.

The BBBofC refuses to sanction the fight because neither Haye or Chisora holds a British boxing licence.

Chisora's was withdrawn after his actions in Munich, although he has appealed against the decision, while Haye opted not to renew his licence having announced his retirement in October 2011.

"Anyone who participates will be deemed to have terminated their membership," a BBBofC statement read last week.

European Union freedom of trade laws permit the fight to be held in the United Kingdom, while they have been given licences by the Luxembourg Boxing Federation.

Chisora's manager, Frank Warren, has challenged the Board's stance, insisting there is nothing illegal about the fight being licensed by the LBF rather than the BBBofC.

Warren, who claimed more than 20,000 tickets were sold within two days of going on sale, says that no BBBofC rules will be broken because the LBF is an affiliated member of the European Boxing Union and recognised by its British counterparts.

However, the letter from Sulaiman to the BBBofC added: "We will expel Luxembourg from our organisation if the commission went ahead, as well as any person or institution that has relations with them.

"I am sure the European Boxing Union is on the verge of [taking] a strong position against Luxembourg.

"I am also furious with the promoter [Warren is not strictly promoting the fight, German company Sauerland is] who is trying to blast the ethics, honesty and seriousness of the sport of boxing."

It has also been confirmed that Alexander Povetkin will fight for the WBA 'world' heavyweight title [Wladimir Klitschko being the WBA's 'super world' champion] against former world champion Hasim Rahman on the same card.