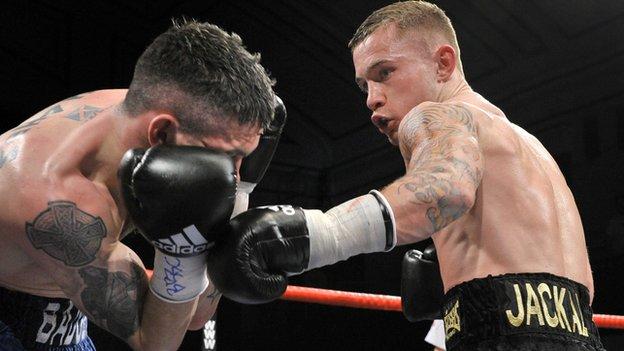 "He's got bags of skill, is as tough as an ox and can really bang," said Froch.

"He can go all the way to the top, which I really believe he will."

Frampton's fight against his fellow unbeaten boxer is on the undercard of Froch's fight challenge to lucian Bute at the Capital FM Arena.

"In a way it's a shame my fight is right after Frampton's as I love watching that kid fight," added Froch.

"I've seen him at close quarters a few times now and everyone he's faced has just not been able to live with him.

"I know Barry McGuigan (Frampton's manager) rates him very highly and he knows a thing or two about boxing.

"Obviously it's a huge night in my career but Frampton is the future and even though he's a Belfast lad, I think my fans will love the way he boxes and I hope they get behind him."

Frampton has won all of his 13 fights so far, with nine wins inside the distance.

The Commonwealth champion looks set to fight for major honours later in the year, with European champion Kiko Martinez on his radar.

The 25-year-old believes a win in his toughest test to date on Saturday will seal the deal.

"A good win here and it could lead to a good ranking in the IBF and then you can start plotting a route to the world title," said Frampton.

"There are guys out there on the world stage that I am not yet ready for, but there's not many in that category, only a handful.

"I believe I'm the best in Britain and in Europe and I want to get the chance to prove that.

"It means a lot that Carl rates me - I'm a huge fan of his and there is so much to admire about him, both the way he boxes and his approach to the sport in general.

"He only fights the best and his record reads like a who's who of the best boxers in the World.

"That must be the blueprint for all fighters and it's certainly the route I want to take.

"I know Carl's fans really got behind Kell Brook when he was the chief support for his Super Six Final in Atlantic City and I hope that they like the look of me and give me a great reception. I can assure them I will pay them back in the ring.

"Hirales comes to fight and he meets you head on which is what I want to face, someone to come and fight me - I don't feel like anyone has actually done that so far and it's frustrating because I haven't been able to show my best."