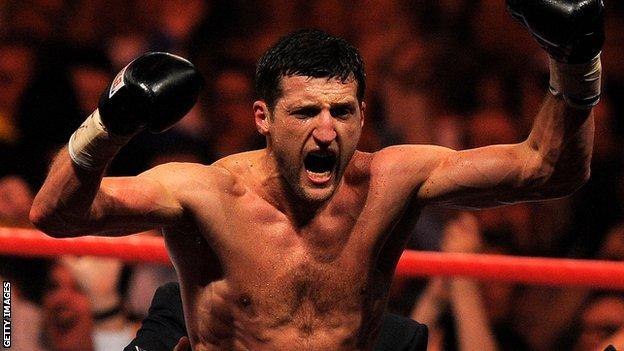 Carl Froch became a three-time world champion with a fifth-round stoppage of Canada's Lucian Bute at the Capital FM Arena in Nottingham.

Froch, 34, was the underdog before the fight but had too much power for the IBF super-middleweight champion.

The home fighter took the first two rounds before putting Bute in all sorts of trouble in a savage third.

Bute was again saved by the bell in the fourth but his corner pulled him out in the next during a standing count.

"After the Andre Ward defeat I was very, very deflated. I was here to put right a wrong," Froch told Sky Sports. "I was more determined than ever before.

"I was very switched on, focused and determined. I came here to do a job. If it had gone 12 rounds it would have been 12 rounds of that. I was on it.

"I could not afford to be lazy and flat-footed. Big respect to Lucian, he can punch, and he hit me with some good shots in there. But I came back."

Froch's victory cements his place in the pantheon of British greats and one of the greatest 168lb fighters in history.

Froch was fighting for the first time since losing the final of the Super Six tournament against Ward in December and some judges thought an epic run of seven elite-level fights was finally taking its toll.

But Froch insisted he still had plenty left in the tank and questioned why Bute had been installed as the bookmakers' favourite when he had not mixed at the same exalted level.

This was the first time since 2009 that Carl Froch has stopped an opponent inside the distance. The last occasion came when he beat Jermain Taylor, though even that contest lasted until seconds from the end of round 12

Bute had made nine defences before this fight but was defending the title he won in 2007 for only the second time outside his adoptive Canada.

Froch shaded the opening round, charging the champion and landing with a couple of left hooks, although Bute had some success on the counter.

Bute got his vaunted left hook working early in the second but Froch came storming back, working his jab and snapping his rival's head back with a crisp right-left combination as he looked to have stolen the round.

Froch had Bute veering around the ring in a dramatic third, the challenger teeing off with his right hand and pouring on the combinations as the champion retreated to the ropes, looking at one stage as if he was about to fall.

With Bute struggling to close the gap, Froch again got the better of some brutal exchanges in round four and the Canadian staggered to his corner at the bell, to the extent that his team might have been best to pull their man out.

But Bute, 32, could not withstand the continued onslaught in round five, his corner calling a halt to proceedings as he was receiving a standing count from referee Earl Brown.

Bute had a rematch clause in his contract in case of a defeat but given the one-sided nature of the fight, it is doubtful whether he will want to face Froch again, even on home turf.

After the bout Froch announced he had considered retiring if he lost but the stunning nature of his performance suggests he still has plenty of options.

Should Bute choose not to take the rematch, a meeting with Denmark's Mikkel Kessler, who beat Froch in April 2010, would fit the bill, while the Englishman's ultimate goal is a second fight with Ward in Las Vegas.