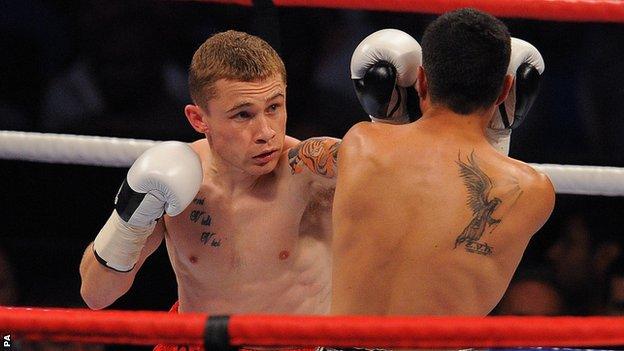 The 25-year-old has won all his 14 fights but brought his Mexican opponent's unbeaten record to an end.

Frampton showed his class to keep Hirales at bay while landing the cleaner punches throughout in what was a clinical and measured display.

This kid's a world-class fighter

"I am starting to prove I am the real deal," Frampton said.

"It was easily the toughest fight [I have had]. I thought I boxed the best I have ever boxed as a pro."

The bout was the main support to Carl Froch's IBF super-middleweight title contest against Lucian Bute.

But it was a cagey affair that failed to whet the appetite of a partisan crowd. Frampton fought intelligently from the off, never allowing Hirales to get going in a battle that was more for the purists.

Throughout the contest he landed carefully-chosen shots, while receiving little back in return from a frustrated Hirales. That was reflected in the scorecards as judges marked the fight 120-108 119-109 119-109 in Frampton's favour.

The Frampton camp are now hoping to set up a fight with European champion Kiko Martinez.