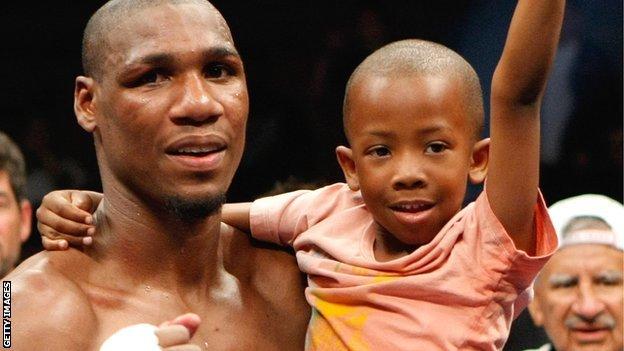 Former world champion Paul Williams has been left paralysed from the waist down after a motorcycle accident on Sunday.

The 30-year-old American, a two-time WBO welterweight champion, severed his spinal cord after being thrown from his bike in Atlanta, Georgia.

Williams was scheduled to fight Saul Alvarez for the Mexican's WBC light-middleweight crown in September.

However, manager George Peterson said the fighter had been told by doctors he was unlikely to walk again.

Peterson said: "Paul is in denial right now. It's been that way with him. You tell him he can't or won't do something, and he wants to prove you different.

"So whatever the doctors say, he's not listening. But they say that walking and boxing is not going to happen."

Williams beat Antonio Margarito for his first title in 2007, before losing his next fight to Carlos Quintana.

Williams beat Quintana in a rematch before surrendering his title when he moved up to light-middleweight, where he secured the interim WBO crown by defeating Verno Phillips.

But a subsequent second-round knockout by the Argentine in 2010, and an unimpressive and controversial points win over Erislandy Lara the following year, saw his stock fall.

The scheduled fight against Alvarez, which was to have taken place at the MGM Grand in Las Vegas on 15 September, was a chance for Williams to prove he was still among the sport's elite fighters.