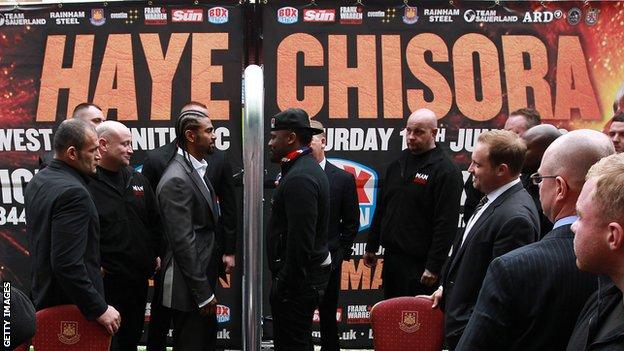 Frank Warren says he intends to sue the British Boxing Board of Control over its threat to revoke the licence of anyone involved in the fight between David Haye and Dereck Chisora.

The board had said parties involved would be deemed to have terminated their membership of the BBBoC if the 14 July fight at Upton Park went ahead.

It now says any members involved in the bout will be called before the board.

But Warren, Chisora's manager, said: "I intend to issue proceedings."

Neither Haye nor Chisora holds a British licence, with Chisora suspended in February after the duo brawled in Munich.

Chisora has appealed against the decision, while Haye has never renewed his licence after announcing his retirement from the ring in October 2011, following his defeat by Wladimir Klitschko.

However, Warren insists there is nothing illegal about Chisora's fight with Haye being licensed by the Luxembourg Boxing Federation rather than the BBBoC.

"I will support all other licence holders who feel intimidated into not participating in the Haye v Chisora promotion," added Warren.

"The board seems to have pre-judged the issue without hearing the point of view of any of its members and this is just wrong."

In addition, Warren claimed the board's stance could stop Kevin Mitchell, whom he also manages, from fighting on the undercard.

He said: "This is such a shame as Kevin was looking forward to fighting in front of the crowd at West Ham and it would have been great for the fans to see him again.

"He is asking the board to reconsider and it may be forced to do so rather than face proceedings from Kevin for the purse he would have earned together with the lost opportunity to fight in front of 40,000 people."