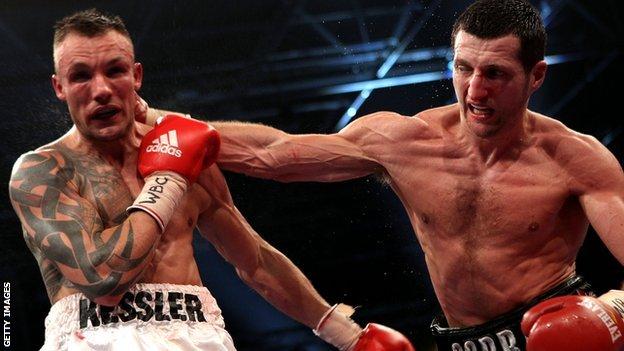 Froch versus Kessler is the perfect fight that everyone wants to see. Carl, Kessler, the fans and the broadcasters

Froch overcame undefeated Canadian opponent Lucian Bute in Nottingham in May, and now wants to challenge Kessler to a second encounter.

The 33-year-old Dane beat Froch in Herning in April 2010, one of only two defeats in The Cobra's career.

"Kessler is our preferred choice and our number one option," said Hearn.

Kessler beat Froch on points in their bout as part of the Super Six round-robin tournament and Hearn insists his boxer has the skills and power to exact revenge.

"Kessler is Carl's favoured opponent," Hearn told BBC Sport. "He wasn't at 100% for their first fight and he lost a narrow decision. If that had been in the UK, he would have won.

"We're looking at Froch's next fight being in October.

"Froch versus Kessler is the perfect fight that everyone wants to see. I spoke with Kessler's people last week.

"It's down to the demands of Kessler. He has already asked for a fight in Denmark but we said absolutely not. Carl is a three-time world champion. We would sell 20,000 tickets for that here."

Bute has an automatic rematch clause following his fifth-round stoppage in Capital FM Arena, but Hearn thinks it unlikely that the Canadian's camp will choose to enact it.

While a couple of the judges' scorecards looked far too lop-sided, Froch could have few arguments with the outcome

He said: "From a promoter's perspective, the last thing I'd recommend is for my fighter to take a beating like that again.

"Commercially, there's not a broadcaster who would want to see that fight again. The Bute fight was on in 20 countries and it was a good fight, but very one-sided.

"I spoke to Bute's people 10 days ago. Lucian is still disappointed."

Bute has to call for a rematch within the next six months, which puts any further plans with Kessler's representatives on hold, according to Hearn.

"We can't do anything until we know what's happening with Bute. He will need a three-month training camp, so I expect he will have to make a decision by the end of this month.

"I'm sure he's not afraid of Froch, but there are easier fights for him out there [in Denmark] for good money.

"Froch is much hungrier for this fight than Kessler but money talks. Let's see if we can get the money right."