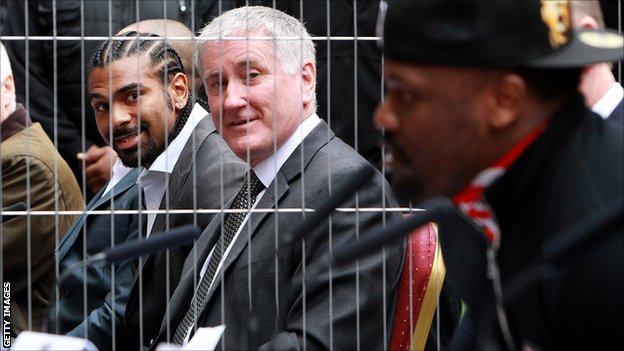 Ricky Hatton says he would be seething over David Haye's fight with Dereck Chisora, if he was on the British Boxing Board of Control (BBBofC).

The fight, due to take place at Upton Park on 14 July, has been as neither fighter holds a BBBofC licence.

Hatton told BBC Radio Manchester: "I'll watch it. It will be a good fight.

"They're not breaking any rules but if you were sat on the BBBofC committee, steam would be coming out your ears."

Former two-weight world champion Hatton continued: "If you were on the board of control, you'd be seething a little bit.

"But nobody's breaking any rules and, even though I'm a boxing member for the BBBofC, when it comes on the box, I'm sure I'll watch it."

The two British heavyweights were following Chisora's loss to Vitali Klitschko in February.

Chisora had his licence withdrawn, while Haye relinquished his licence at the end of last year following his WBA world title defeat to Wladimir Klitschko.

Hatton, now a promoter, was speaking ahead of the WBA interim world super-bantamweight title fight between Rendall Munroe and Scott Quigg in Manchester on Saturday, a bout which he believes could be one of the best of the year.

"As hard as it is having two fighters in my camp fighting each other, it's a wonderful opportunity for them and I'm not going to starve them of that," he added.

"The winners will go onto bigger and better things, and for the runners-up, I'll be here again to rebuild them."