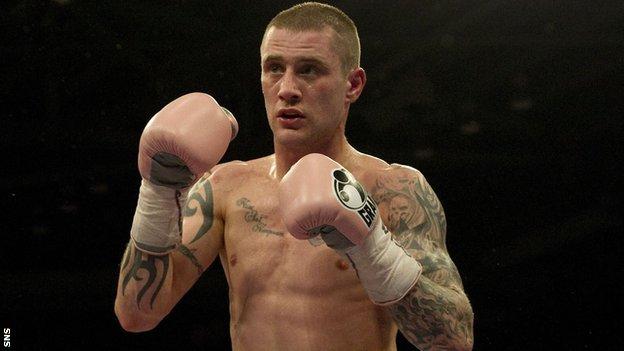 Scotland's Ricky Burns will put his WBO lightweight title on the line against England's Kevin Mitchell in Glasgow on 22 September.

Burns, at 29, is 18 months older than his opponent from Essex but the pair have almost identical records, and were once sparring partners.

"I'm in this sport to prove I'm the best, next to me Mitchell's the best around, and it will be a great fight between two warriors," said Burns.

The venue has yet to be confirmed.

The Coatbridge fighter's last defence was against Paulus Moses in March when he produced a confident performance to defeat the Namibian on points.

"The fight's been on the boil for the last couple of years and the fans and press have been desperate for it to happen. It's fantastic that it's on at last," added the defending champion.

"We are both at the top of our game now.

"He put on a great showing against John Murray last year that showed just how good a boxer he is to take apart another champion.

I rate Burns very highly, he's a great fighter and has really proved himself as one of the top champions in the world

"But this fight is the fight I've wanted and it's got me really excited.

"Mitchell's going to bring out the best in me and I believe that the fans are going to be in for an unbelievable fight."

Burns moved up to lightweight last November when he beat the Australian Michael Katsidis at Wembley - the only man to have beaten Mitchell in 34 bouts.

Mitchell's fight against John Murray last July was voted Fight of the Year in which he stopped Murray in the eighth round of a thrilling contest.

In February he beat the tough Dominican Republican Felix Lora over ten rounds and has been shouting for a confrontation with his Scottish adversary.

Mitchell said: "I'm promising you now you're going to see the best fight of the year or any year.

"This is a real fight between the two best in the division and it's not going to be for the faint-hearted.

"I rate Burns very highly, he's a great fighter and has really proved himself as one of the top champions in the world.

"I'm going into the lion's den and I know I can beat him and take the world title. Burns is a top kid and I've got to be at the top of my game, the fittest and strongest I've ever been in my life to win."

Billy Nelson trains Burns at his Fighting Scots gym in Lanarkshire and he is in no doubt that the WBO belt will not be heading south.

"Kevin Mitchell is a very good fighter but Ricky is better in every department, as far as I'm concerned," he told BBC Scotland.

"He's getting a chance to grab our title but we are adamant that he's not going to win this fight."

Nelson is delighted that the bout will take place in Glasgow and not, as was once mooted, at West Ham's Upton Park.

"He is one of the best fighters in the world, why should we go anywhere else to fight?" he said.

"We have a good fan base in Scotland. Let's showcase our talent and keep the Scottish fight fans happy."