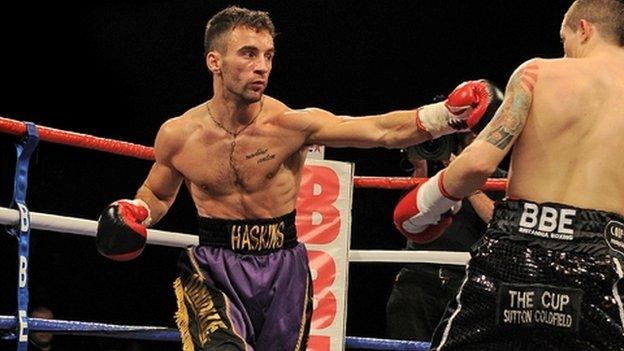 The Bristolian takes on Stuart Hall on Saturday for the vacant European Bantamweight title, as part of a ten fight card alongside Tyson Fury and Chris Eubank Jr in Somerset.

And Haskins wants to use the meeting as a stepping stone to the world stage.

"He's got a bit of Naseem Hamed about him. He can bang and he's tremendously powerful for a small man.

The former featherweight champion added: "He's got a bit of Naseem Hamed about him. He can bang and he's tremendously powerful for a small man.

"Stuart Hall is getting on a bit and is a little pedestrian at the best of times, and is one-dimensional. I would pick Haskins strongly in that one."

Saturday's contest in Clevedon is the first time Haskins has fought in the west country since 2007.

A former English and Commonwealth flyweight champion and the reigning British super flyweight champion, Haskins has been desperate to move on to the world stage, but his promoters have found it hard to secure suitable bouts.

But McGuigan warned that Haskins will face a tough battle to move up the rankings.

"You can talk about potentially winning European and British championships, but winning a world title is that much more difficult.

"He's talented and he's very close to being world class. I think if he gets a weak champion then he can win."