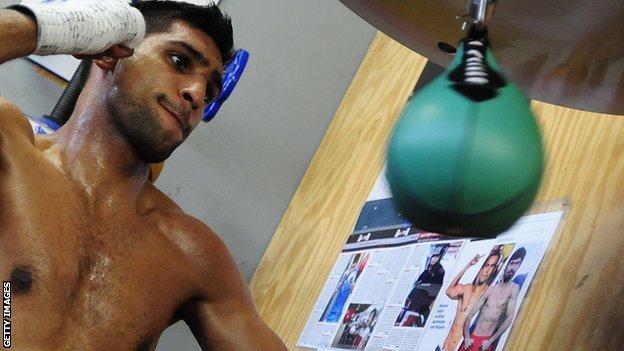 Amir Khan has had his WBA light-welterweight belt reinstated by the governing body and will put it on the line when he fights WBC champion Danny Garcia in Las Vegas on Saturday.

The Briton lost his WBA and IBF belts to Lamont Peterson in December in controversial circumstances.

A rematch was cancelled when Peterson failed a drugs test.

"Justice has been done," Khan said. "It means this fight (against Garcia) will show who is the best in the division."

Khan appealed following the points defeat against Peterson, with the WBA saying there were "multiple irregularities" in the fight. The IBF is still to make a decision as to whether to reverse the original fight result and return its belt to Khan.

The Bolton-born boxer said: "I'm glad the WBA are reinstating me as champion; it means I walk into this fight as world champion.

"There is a chance to win the WBC belt as well but, not only that, the Ring magazine title will be on the line. There are five main belts in this division and I will have won four of them if I win this fight.

"The only one I have not won is the WBO one, but I tried to fight Tim Bradley for that and he turned me down. If I win against Garcia, it means I have done everything I want to do in this division."

With the WBA title now on the line, the light-welterweight title fight against Garcia gains added significance.

The Haye-Chisora bout has attracted a lot of interest following their much-publicised brawl in Munich in February.

Former WBA world heavyweight champion Haye has come out of retirement to fight Chisora at Upton Park in a meeting arranged after the pair brawled in a media conference following Chisora's loss to WBC champion Vitali Kitchsko.

Chisora was subsequently suspended by British boxing authorities and the feud continued to attracted attention when the British Boxing Board of Control refused to sanction the fight.

The contest is expected to attract a crowd of more than 28,000, but Khan has played down its significance.

"David is a friend of mine but the fight is not a big fight," he said. "There are no titles on the line and I don't think Chisora is in the top 10 in the world.

"I'm in the capital of boxing in Las Vegas. It makes my fight a lot bigger. And the guy I'm fighting Danny Garcia is in the top 10 in the world."

Khan has spoken of his confidence ahead of facing Garcia, something he puts down to a new training regime.

The Bolton-fighter has enlisted the services of strength and conditioning coach Ruben Tabares, who has introduced some unusual practices into Khan's preparations.

"He's made me change to a non-fluoride toothpaste because apparently fluoride is really dangerous, contains rat poison or something and can even kill you," Khan explained.

"I'm one of those guys who listens to what my trainers tell me - even if it sounds a little bit strange sometimes - and I do it anyway."