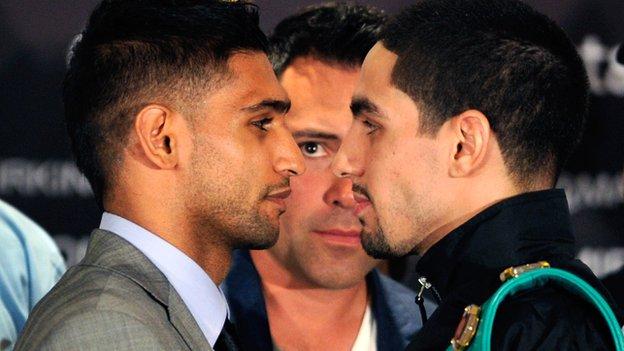 Amir Khan wants to prove he is the best in his class by beating Danny Garcia and then plans to move up to welterweight to face Floyd Mayweather.

Khan, 25, will go into his light-welterweight bout with WBC holder Garcia as WBA champion after Lamont Peterson was stripped of the title.

"This is my chance to prove that I'm the best in the division," said Khan.

"I can win the WBC title and will have held three of the four belts, so it's time to move up to 147lbs."

Both Bolton's Khan and Philadelphian Garcia, 24, weighed in at 139lbs, one pound under the 10 stone light-welterweight limit ahead of their Las Vegas clash, which takes place in the early hours of Sunday morning (BST).

They will also be battling for the Ring Magazine title, awarded when the best two fighters in the division face each other.

Khan lost his WBA and IBF titles to Peterson in a controversial defeat last December but the American subsequently failed a drugs test.

He now faces the undefeated Garcia, who won the WBC title against Erik Morales in his last outing, and is confident of overpowering Khan.

"He gets hurt in nearly every fight," said the American. "Then he runs after he gets hurt. That's not defence. When he gets hurt on Saturday night, that's what he'll do again.

Garcia's WBC championship will be on the line, as will Khan's WBA crown.

"It's great that this is a unification fight, it just keeps getting better and better for me," said Garcia.

If Khan were to move up a weight division, he would target a bout with multi-world champion Mayweather.

The 35-year-old American has won all 43 of his professional fights and is a massive box office draw.

Khan said: "I just think there are more challenges out there for me in that division.

"I want to be in big world title fights and in big fights with the likes of Mayweather. To do that, I need to be up in that division.

"It's not about the money, it's about me knowing I can beat the guy and be the next guy at the top, the next pound for pound champion."