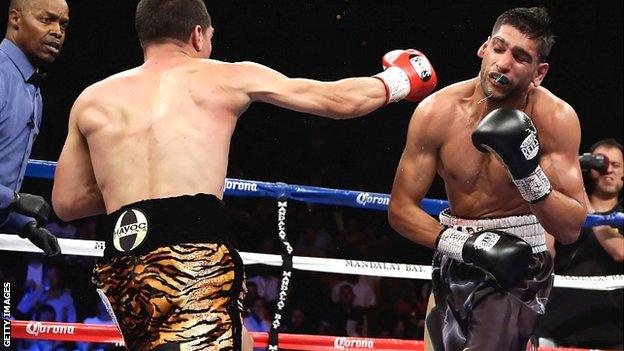 Amir Khan has dismissed suggestions that he should retire after losing his WBA light-welterweight title with a fourth-round defeat by Danny Garcia.

IBF super-middleweight world champion Carl Froch said he would quit boxing if he had been knocked out in similar style to Khan.

But the Bolton fighter, 25, told BBC Sport: "I'm not talking about retiring, I'm still young, I've got a lot in me.

"I'm still hungry and I'll come back a lot better and a lot stronger."

"The people around Amir will be doing their best to encourage him and make him feel good. But when he switches the light off at night he will be very depressed and disappointed.

"I've got no doubt he can come back again. He might even win a world title again. But I don't know if he can ever reach the heights he thought he could reach."

It was the third setback of Khan's career following a first-round knockout against Breidis Prescott in 2008 and the loss to Lamont Peterson in December.

Froch said at the weekend: "Khan's been knocked out by someone who is not touted for the top level. It's very damaging. I would retire if that happened to me."

But Khan responded: "Carl's always got his little things to say and I'll leave it to that really. If he wants to retire he can retire.

"I'm in a tougher division, I'm fighting better opposition and I'm a bigger name than him. That's what burns him really.

Prior to the fight, Khan had talked about stepping up to welterweight for a meeting with unbeaten American Floyd Mayweather.

But he now admits it is more likely he will remain at light-welterweight for at least one more bout.

"It's put things back," he explained. "I made 140lb very comfortably this time and I think it will be ideal for me to stay maybe one more fight - if I can win the title and then move up to 147lb. No rush.

"People believe 'Amir should be moving up, doing this, doing that'. People forget how old I am. I'm still young and there's a lot I need to work on before I do move up to the next division.

"We're going to try for the rematch. I don't know if they're going to take it, but if we can get that in England it will be amazing."

Khan insisted he had "no regrets" apart from the huge left hook that dropped him to the canvas in round three.

Trainer Freddie Roach feels his fighter can return from this latest setback, but Khan hinted that he would examine their partnership.

Khan has spent a number of months away from home, training in Los Angeles and the Philippines before facing Garcia in Las Vegas.

"I'm going to sit down when I go home and see where we go from there," he added. "I want to be the main priority.

"A lot of travelling - going to the Philippines, here, there, everywhere - does take a lot out of you, especially when you're a young fighter and I've never done it before.

"I'm going to start thinking about myself because normally I'm thinking about others too much and I'm the one who's in the ring taking the punishment. It's time now where maybe I do things a bit differently.

"When you're nice and just agree with everything, sometimes even though you're not happy doing things, you just do them. But I'm going to have to sit down with the team now and do things I want to do.

"There are a lot of untied knots there and we're going to fix them."