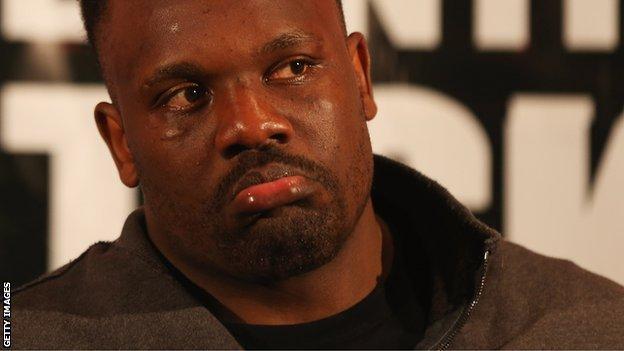 British heavyweight champion David Price says he would be happy to fight Dereck Chisora next year but admits a bout against David Haye is unlikely.

Haye knocked out Chisora, 28, in the fifth round at Upton Park on Saturday.

Price, 29, told BBC Sport: "I want to fight the best fighters and Chisora is one of the best in Britain and would be a good test for me.

"A fight with Chisora would create interest and if the fans wanted to see it, I'd be happy to take part."

Chisora is appealing against the indefinite suspension of his licence by the British Boxing Board of Control after a post-fight brawl with Haye in February.

David Haye's got nothing to gain by fighting me

"I feel I can beat anyone on my day and Dereck Chisora is no different. I've sparred a lot with him and we've had some good sessions. It would make a good fight, but I would be 100% confident of beating him," said Liverpudlian Price.

"Next year sometime if I'm still British champion and move on to another level, there might be an opportunity.

"He would have to reapply for a licence and there's a lot of ifs and buts, although it's a possibility.

"Chisora's had some tough fights. He is going to have to have a bit of a rest, lower his expectations, drop down to domestic level and rebuild."

Former Commonwealth gold and Olympic bronze medallist Price has won 11 of his 13 professional bouts by knockout.

He was only the second man, after Chisora, to defeat Sam Sexton when winning the British and Commonwealth titles in May.

"We are in the process of arranging our first title defence and speaking to a couple of potential opponents, which we hope to announce soon," said Price.

He confirmed his promoter Frank Maloney was discussing a possible deal with broadcaster BoxNation, which screened the Haye-Chisora bout and whose major shareholders include Chisora's promoter Frank Warren.

"We haven't got a TV deal because Sky have dropped out. Frank [Maloney] is talking to a couple of broadcasters, including BoxNation," said Price.

"In 12 months' time I definitely want to be European champion and knocking on the door of world-class level."

Price's potential future opponents could include the unbeaten Manchester-born fighter Tyson Fury, who vacated the British and Commonwealth titles in February before winning the WBO Inter-Continental Heavyweight title earlier in July.

Haye, 31, retired in October following a points defeat in Germany to heavyweight champion Wladimir Klitschko, but returned to the ring to beat Chisora.

He may quit the sport again unless a contest can be arranged with Wladimir's older brother Vitali, who defended his title in February against Chisora, defeating the Briton by a unanimous decision.

A brawl in the post-fight media conference between Chisora and Haye ultimately led to the pair's fight on Saturday.

It was sanctioned by the Luxembourg Boxing Federation after Britain's governing body refused to recognise it.

Price added: "David Haye's got nothing to gain by fighting me. I'm just British champion and have only had 13 fights. He's a former world champion and he wants to be fighting the very best.

"A fight with me wouldn't generate any interest worldwide, although it probably would in Britain."